Donald Trump Is Failing His Crash Course in Leadership

President-elect Donald Trump is taking a crash course in how to be the leader of the free world. Trump played fast and loose with the facts during the presidential campaign and was careless with the types of advisors he listened to (Alex Jones comes to mind). All of that changes now as he moves into the Oval Office. Facts matter a great deal when people could be harmed. And, in this new role, the people he listens to matter.

This past weekend—when Trump used a blatantly fake news account drawn largely from Jones’ notorious InfoWars website to proclaim that there were three million illegal votes in the 2016 election—is precisely the sort of scenario that his own advisors had hoped to avoid. Trump is clearly angered by the election recount underway in Midwest states, but his response to that challenge isn’t just un-presidential—it’s not tethered to reality. Trump managed somehow to de-legitimize an election that he won. It’s led many to wonder if he’ll ever learn in time.

It seems that Trump wants to learn how to be presidential. He talks regularly with President Obama and has expressed a willingness to learn. But then, Trump, as he did so often during the campaign, lunges for the microphone with no apparent thought for what his words might convey.

Trump’s breathtaking learning-curve challenge was on full display in the extraordinary on-the-record discussion Trump had recently with editors, columnists and reporters at the New York Times—the first time he has really answered questions from the media in any formal, public setting since the election.

On big, important issues like national security, immigration, climate change and health-care coverage for the poor, Trump’s responses were based on personal anecdotes and disputed arguments that are a decade old and almost irrelevant now.

Trump’s answers to questions on climate change from columnist Tom Friedman, and a follow-up question from editorial page editor James Bennet, are the most obvious examples. Trump has said that he’ll withdraw from the Paris climate agreement, the historic global accord that nearly every world leader on the planet agreed to at the end of 2015. Friedman asked him if this was really true.

“I have an open mind to it. We’re going to look very carefully,” Trump said. He added that “a lot of smart people” disagree with scientists on the issue; and talked at length about how his own beliefs on the climate issue were shaped by his uncle, who was a professor at MIT “a long time ago.” He referred to an incident from nearly a decade ago where someone hacked into the emails of climate scientists—which showed nothing more than the simple fact that scientists argue among themselves, genuinely believe in the scientific process and hold firm to a peer-review process that has produced a near-consensus on the fact that humans are contributing significantly to climate change. When pressed by Bennet, Trump said that there was “some connectivity” between human activity and climate change. He also compared his environmental record to the golf courses he’s built.

Meanwhile, as journalists have reported since the election, Trump Tower has stacked the leadership of the transition teams at federal agencies and departments with people who have worked for years in political networks that deliberately confuse the public on the science of the issue.

To say that this is a somewhat messy, unstructured way of engaging with an important issue would be an understatement. The very real question, on this issue and many others, is this: who is Trump listening to and taking guidance from as he careens full tilt through a chaotic, unpredictable effort to learn how to be a president?

If he selects Mitt Romney as Secretary of State it means Trump is paying attention to world leaders who wish to see a steady hand at the helm of U.S. foreign affairs. If he selects Rudy Giuliani, it means Trump continues to trust those who are closest and most loyal to him, regardless of the message it might send. These choices will define the trajectory of the Trump presidency because the advisors who influence what he says publicly now matter in ways that simply didn’t during the campaign.

The Times questioned Trump on his selection of his campaign CEO, Steve Bannon, as his chief strategist at the White House—a move that signaled to many that he intended to continue to publicly echo the sorts of alt-right, racist and anti-Semitic language that Bannon’s former publication, Breitbart News, has built its reputation around.

“I’ve known Steve Bannon a long time,” Trump said. “If I thought he was a racist, or alt-right, or any of (those) things…I wouldn’t even think about hiring him. First of all, I’m the one that makes the decision, not Steve Bannon or anybody else.” What Trump doesn’t realize—at least, not yet—is that his advisors do matter, even if he makes every important decision.

What is also extraordinary is that longtime Republican Party insiders and professionals in Washington—many of whom are angling to have influence in the new administration—all say privately that they have no idea whatsoever how Trump Tower is choosing to create his administration. When a new name appears in media coverage, they’re often surprised as everyone else.

“We’re trying very hard to get the best people,” Trump told the Times. “Not necessarily people that will be the most politically correct people, because that hasn’t been working.”

The second part of this answer has world leaders wondering just what the 45th president of the United States will ultimately believe, say and do once he’s in office. For now, it’s clearly a work in progress—a breathtaking crash course in how to run a military and economic superpower in a fragile, uncertain world. 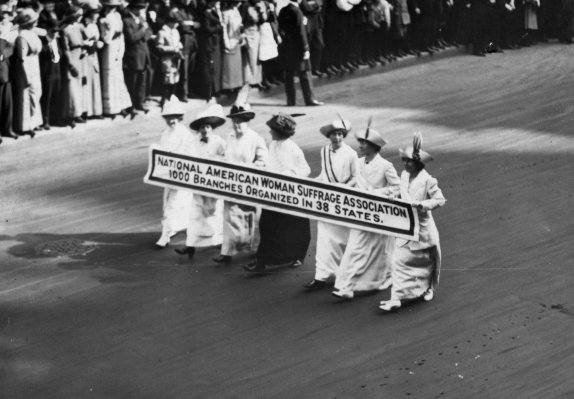 The History Behind the Myth That Women Vote as a Bloc
Next Up: Editor's Pick