The Thorny Ethics of Prenatal Testing

Recent technological advances raise a pressing ethical question: Should prospective parents be able to acquire whatever genetic information they want about their fetus?

One answer is yes, if parents truly understand the nature and limits of the information they’re requesting, they have a right to acquire it and use it as they see fit. That’s what a recent essay in the New England Journal of Medicine advocates, and, ultimately, that might be the best answer staunch pro-choicers like myself can offer.

But that answer might also be a bit too crisp, or at least too fast, for people committed both to choice and to speaking candidly about where we’re headed. To understand that, it’s necessary to understand the convergence of two technological advances.

The first makes it possible, and ever cheaper, to determine one’s entire DNA sequence. Last summer, a system of healthcare providers began to offer “whole genome sequencing.” That system offers to screen only for genetic variants known to put people at greatly increased risk of treatable diseases. But whole genome sequencing allows one to look for virtually any genetic variant about which there is a published finding—whether that finding puts one at slightly or greatly elevated risk for disease, and whether that finding is related to the fetus’s future health or to its future social success.

The second technological advance makes it possible to retrieve samples of the fetus’s genome ever earlier in pregnancy. We’re now on the brink of being able to screen a fetus’s DNA at as early as 8 weeks. Because the new technologies are “non-invasive”—they only require drawing blood from the pregnant woman—their first advantage is that they don’t carry the risk of a miscarriage. A second advantage is that detecting fetal abnormalities earlier in pregnancy can lead to more effective, in-utero treatment. Thirdly, but most controversially, if an abnormal finding is detected, prospective parents have the option of a relatively early-stage abortion.

In the context of prenatal genetic screening, candidness can be in especially short supply. When medical anthropologists Nancy Press and Carole Browner studied the introduction of an early form of prenatal screening into routine clinical practice in California in the 1980s, they found that hardly anyone wanted to talk openly about that “third advantage” of prenatal testing. Prospective parents, clinicians, and public health workers all preferred to remain “silent” regarding the abortion option—and to engage in what Press and Browner called “the fiction” that the sole purpose of screening is to ensure the fetus’s health.

But as we move forward with the newer technologies of prenatal diagnosis, we owe it to ourselves to resist the temptation to engage in the sorts of “collective silences and fictions” that Press and Browner observed. Moreover, we owe it to ourselves to remember three facts that should make us wary of a too-crisp answer to whether there should be limits on what fetal information parents can access:

1. We are early in the stages of understanding what most genetic data mean. Our ability to comprehend the data generated from whole genome sequencing is wildly outstripped by our capacity to glean meaning from that data. Geneticists usually can’t determine that a trait will be present, but merely the probability that it will be. While some research has detected zero negative psychological effects of adults receiving probabilistic information about, say, their risk of Alzheimer’s, other research concludes there are negative effects. If we don’t yet fully understand the impact of probabilistic genetic information on adults who receive it about themselves, we surely don’t yet understand the impact of such information on prospective parents (and their relationship to their child, if the fetus is brought to term). We need to be candid about the extent of our ignorance regarding the meaning and effects of this tsunami of data.

2. These data don’t only promise to give us insight into traits related to disease, but into traits that have nothing to do with disease as well. Considerable resources are now being poured into efforts to identify genetic markers associated with massively complex non-medical traits, including most famously and controversially, intelligence. If we think there’s a right to prenatal genetic information regarding all non-medical traits, let’s say that clearly and explain why.

3. The prenatal sphere is vulnerable to the forces pushing toward expanded and mandatory screening in the newborn, child, and adult contexts. Everyone who speaks about these matters agrees that prenatal testing should be voluntary, but the trend in other areas of medicine is toward mandatory screening for some diseases. Newborn screening is currently mandated in most states, and the number of conditions screened for has grown steadily. To the surprise of many, last fall the American College of Medical Genetics recommended that, when clinicians screen a DNA sample for a genetic variant associated with a disease, the laboratory should routinely screen for variants in an additional 56 genes.

There are solid utilitarian reasons for health care systems and parents to seek ever more testing for ever more traits: It has the potential to improve the health and overall “quality” of our offspring, to reduce psychosocial burdens on parents, and to reduce health care costs. Human families, however, have traditionally been a refuge from the utilitarian thinking that dominates so much of our lives. Families have been where we love people not because of their traits, but because they’re members of our family. If we’re prepared to let the utilitarian attitude colonize our thinking about creating families, let’s at least be candid about what we’re doing and why.

Erik Parens, PhD, is a senior research scholar at The Hastings Center, a bioethics research institute in Garrison, NY. He is the author a forthcoming book to be published in 2014 by Oxford University Press, Technologically Shaping Selves. 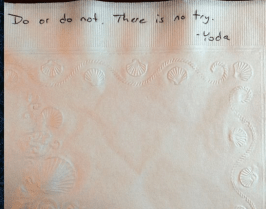 Dad Is Prepping Over 800 Napkin Notes for Daughter's Lunchbox Before He Dies
Next Up: Editor's Pick