An 8-year-old girl was abducted from her front porch in a small southern Illinois city while she waited for a church bus – then sexually assaulted and murdered – one day before Thanksgiving, authorities say.

Sabrina Stauffenberg’s body was found near a vinegar plant Wednesday night, hours after she vanished, the Belleville News-Democrat reports.

On Sunday, police arrested 53-year-old Glen Ramey in connection with Sabrina’s death, PEOPLE confirms. He was taken into custody around 2:20 a.m. on Sunday and charged with first-degree murder and predatory sexual assault.

“She was standing on her front porch, waiting for the church bus. She was on the phone with her grandma at the time,” Denise Haley, a friend of Sabrina’s family, told the News-Democrat. “She was telling her grandma that the church bus hadn’t come.”

Sabrina’s grandmother hung up and called the church to ask why the bus was late. When she tired to call Sabrina again, there was no answer, Haley said.

Haley told the News-Democrat that Ramey had been dating one of Sabrina’s relatives.

Ramey has not yet entered a plea and is being held at the Richland County jail. Online records show that his bail has not been set.

He is named as a defendant in several orders of protection filed by multiple women in both 2014 and 2016, the News-Democrat reports. He is not listed on the Illinois’ sex offender registry.

Haley started a GoFundMe page to help the girl’s family in the wake of Sabrina’s death.

In Haley’s initial post on the page, she wrote: “Last night this little girl was taken too soon. Although details are slim and our whole community is grieving such a horrific loss nothing can compare to what the family is experiencing.”

“She trusted everybody,” Haley said. “She loved to play outside. She just learned how to ride a bike, so she loved riding her bike.” 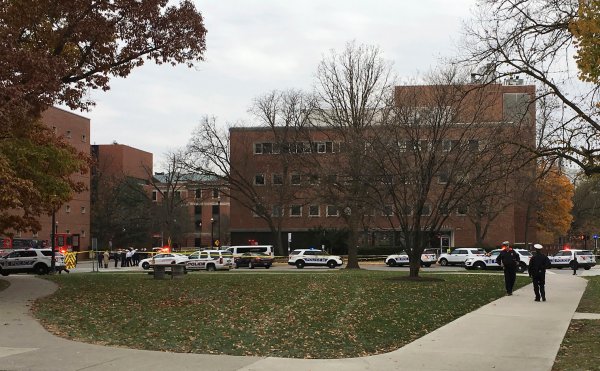 11 Injured in Ohio State University Attack
Next Up: Editor's Pick