I have a confession to make: I never really enjoyed Play-Doh. And neither has my son. Granted, he’s just over two years old, but so far, the popular putty hasn’t caught on with him. That’s until the iconic toy company got with the times and released an app-connected play set that’s delighted us both.

Before I explain Play-Doh Touch Shape to Life Studio, it’s worth sharing my household’s digital policy when it comes to the little-fingered folks. We pay strict attention to the American Academy of Pediatrics’ screen time rules, which hold that kids under two-years-old should get no tech time, while older kids can get just an hour per day. That said, my mini-me is a digitally adept toddler, using FaceTime to visit with far-flung family, HBO Go to watch Sesame Street, and even enjoying some silly Snapchat filters — all while supervised, of course.

But even with rationed exposure to technology, he’s equally adept at tapping a touchscreen as he is mashing his palm into a ball of neon dough. And while the world we live in is increasingly digital, the physical realm isn’t going anywhere, so I have to find a way to engage him (and me) in it. Helping kids (and adults) build creatures which they can then scan into an iOS app using an iPad camera, Play-Doh Touch does exactly that. (The app is coming to non-Apple platforms next year, says toymaker Hasbro.)

The $39 package is a pretty good starter kit for anyone just getting started with Play-Doh, whether they’ve got an iPad or not. Packing stamps to make five distinct characters, two dozen other tools for top-notch creations, and seven cans of Play-Doh, it’s a nice haul.

I decided to review Play-Doh’s latest offering as if I was a kid myself. So I ignored the directions completely (other than downloading the app) and just went for it. My son and I began by making our creatures, which involves stuffing the colorful compound into the molds, and then cleaning them up using the tools provided. Though he was officially too young for this toy, he still seemed to understand it somewhat. I’ve no doubt using Play-Doh Touch will be easy for most three- to five-year-olds.

Probably the most challenging thing about Play-Doh Touch is scanning the sculptures into the app. Rather than using a boring old camera interface, the app’s design makes it seem like you’re sucking these little clay creatures into an iPad through a magical portal. It’s fun, but it makes the scanning process a little more difficult than it should be. As a circular aura floats around the screen defining the scannable space, cramming your whole creature into the window can be hard. Of course the further away from the sculpture you hold the iPad, the easier the scanning gets. But if you’re playing with Play-Doh Touch on a table, that means the kid needs to stand on a chair to snap the picture. That’s not a good parenting decision. So prepare to chaperone this activity.

Once the little monsters are imported into the app, the real fun begins. Because it’s not a true 3-D scan (Play-Doh Touch uses the camera to interpolate what these flat creations would look like), the creatures don’t look as cute and cuddly as the marketing materials show. My purple jellyfish lolled about like a long-legged giraffe, and my son’s orange dinosaur seemed to have a flip top hinge for a jaw, and his head bounced around uncontrollably wherever he walked in the colorful world displayed in the app. Those misrepresentations might sound like a slight, but that couldn’t be further from the truth. Our creations were fun because they were faulty (think Island of Misfit Toys), and it was a delight to watch them come to life on the iPad.

At this stage in his development, my son was more content to control the creatures on the touchscreen than he was to make new ones in real life. But the 3D world rendered in the app is gorgeous, full of easy-to-solve puzzles, and low-stress (your little clay critters can’t fall to their doom, for example), so I was fine to let him explore without much interference. Older kids might find the game’s lack of objectives boring, but the freestyle flow was great for my young one, and it matches the Play-Doh brand perfectly.

In a way, the on-screen experience is like how I had imagined Play-Doh to be — only for everyone else. My type-A personality always made me concerned that my sculptures looked perfect, the colors weren’t bleeding together and ruining my stash, and I wasn’t making a mess. In the app, none of those things are possible, so it allowed me to let go of my hang-ups and just have fun. How novel, right? And since the app can save your creations, continuing the adventure away from the table (and after the Play-Doh has been put away) is not only possible, but encouraged. So now my son wants to play Play-Doh more. Only by ‘Play-Doh,’ he means the app. That’s alright, for now. After all, his mind is still taking shape. 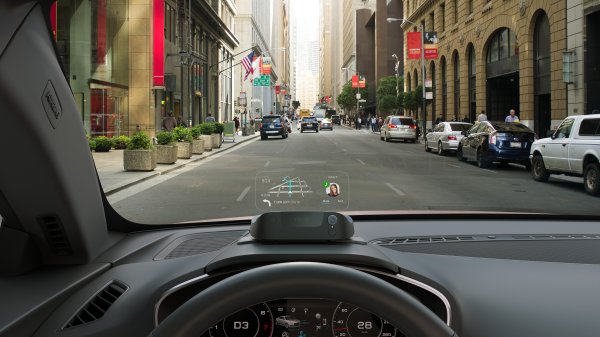 This Car Gadget Can Help You Keep Your Eyes On the Road
Next Up: Editor's Pick