A view of a protest encampment near Cannon Ball, North Dakota where members of some 200 Native American tribes from across the U.S. and Canada have gathered to lend their support to the Standing Rock Sioux Tribe's opposition to the Dakota Access Pipeline on Sept. 3, 2016.
Robyn Beck—AFP/Getty Images
By Katie Reilly

People protesting the construction of the Dakota Access Pipeline will be required to vacate property north of the Cannonball River or face trespassing charges, the U.S. Army Corps of Engineers said Friday.

Dave Archambault, chairman of the Standing Rock Sioux tribe, said he received a letter from the Corps stating that the land would be closed on Dec. 5 due to safety concerns, the Associated Press reported. The letter referenced recent violent confrontations between protesters and law enforcement officers, as well as concerns about impending harsh winter weather.

“To be clear, this means that no member of the general public, to include Dakota Access pipeline protesters, can be on these Corps lands,” the letter said, according to the AP.

The land north of the Cannonball River includes a large encampment where many had been staying to protest the pipeline. Those on the land after Dec. 5 could be prosecuted for trespassing. A free speech zone will be set up south of the river instead, the AP reported.

But some protesters don’t intend to leave the area. Isaac Weston, a member of the Oglala Sioux tribe from South Dakota, argued during a press conference on Saturday that indigenous people have a right to protect the land and water and can’t be removed, according to the AP.

Dallas Goldtooth, a protest organizer with the Indigenous Environmental Network, told the AP that the order was “an atrocious example that colonization has not ended for us here as indigenous people.”

Thousands of protesters, including members of the Standing Rock Sioux tribe and other Native Americans, have gathered in North Dakota for months to oppose the construction of the 1,200-mile pipeline.

“Our Tribe is deeply disappointed in this decision by the United States, but our resolve to protect our water is stronger than ever,” Archambault said, according to CNN. 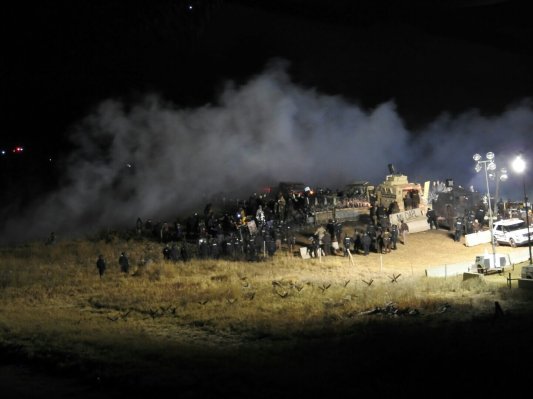 Protester’s Arm Nearly 'Blown Off' at Pipeline Site
Next Up: Editor's Pick