A Rare Handwritten Poem by Anne Frank Has Been Sold for $148,000

An eight-line poem written by Anne Frank, the Jewish schoolgirl whose diaries became one of the most profound documents of the Holocaust, was sold Wednesday at auction in the Netherlands for $148,000.

Frank, a German-born Jew, kept intimate and detailed diaries during the two years her family hid in an attic apartment above her father’s shop in Amsterdam to evade the Nazis during the German occupation. They were eventually discovered and sent to concentration camps, where Frank died of typhus at the age of 15.

The auctioned poem was dated March 28, 1942, about four months before she and her family had gone into hiding.

Addressed “Dear Cri-Cri,” the verse was penned in a poezie album (friendship book) belonging to Christiane van Maarsen, the sister of Frank’s best friend, Jacqueline. Such books were common among Dutch youths at the time.

The first four lines of the poem were appropriated from a Dutch periodical, the BBC says, and are believed to have been traditional and oft-cited lines of encouragement. The latter half appears to have been Frank’s original writing, according to a statement on the auction house web site.

Jacqueline, Frank’s best friend, explained in a note on the web site why she decided to part with the page.

“My sister (nicknamed Cricri) tore this page out of her poezie album and gave it to me around 1970,” read the note, which accompanied the sold item and is quoted on the auction house website.

“I know that my sister was not as attached to this verse from Anne to her as I am to the verse Anne addressed to me, and that is the reason that I am now putting it up for sale.”

The New York Times reports that the Anne Frank House museum, in the Amsterdam building where her family hid for two years, did not bid on the document because it did not directly shed light on Frank’s life. A spokeswoman for the museum, Maatje Mostart, remarked, however, that it was “very special that part of an Anne Frank collection comes out after so many years.” 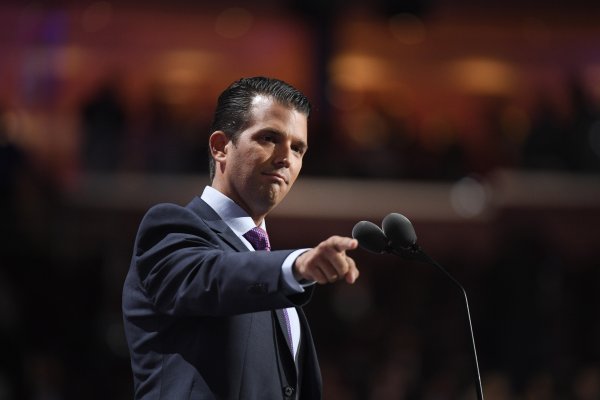 Trump's Son Met With Pro-Russia Diplomats to Discuss Syria
Next Up: Editor's Pick