Janet Mock on What the Election Means for Transgender Americans

In just under an hour, the upcoming HBO documentary The Trans List touches on being outed, being judged, dealing with parents, doing drugs, society’s genital obsession, the bathroom question, going to jail, suicide attempts, taking hormones, sex work, the military, fame, court cases and shopping for clothes. Among other things.

The film, debuting Dec. 5, features the stories of 11 transgender people who each cover fertile ground in 5-minute vignettes about their lives. It’s the latest in a line of documentaries from director Timothy Greenfield-Sanders, who has used a similar format to tell the tales of black, Latino and LGBT icons. But a new hand was helping to steer the ship this time: that of author and media personality Janet Mock, who conducted the hours of interviews that were whittled down to their “essence,” as she puts it, to make The Trans List.

Why these eleven people?

My number one goal was to show that trans people are not a monolith. For so long, in the way the media portrays trans people, there’s been this sense of ‘You were trapped in the wrong body. You fixed yourself through medical intervention. And now you’re here and happy.’ What this shows is that for a lot of people—whether they medically or socially transition, whatever that looks like—the story is about what it means to be yourself and fight for yourself and struggle in the body and identity that you have in this world. For me, it wasn’t so much about what it means to be trans but what it means to be these 11 individuals who happen to be trans—across all kinds of different intersections, whether that’s time, race, age, location or occupation.

What was your approach to the interviews—what were you wanting to draw out of the subjects?

For a lot of them, I assume it’s one of the first times where they’ve been on camera and the person on the other end of the camera was a fellow trans person. So there’s an innate comfortability around that, an innate understanding that I’m not here to get you. I’m not here to make you say anything you’re uncomfortable with. I’m not here to objectify you or make you have to talk about your body in any way you don’t want to. For me, it was capturing the overall essence of: why are you here? What are you doing? What does gender mean? What does trans mean? How does it feel to grapple with that and yourself in this particular time period in our country?

What was it like doing a film like this when there have been so many trans stories in the media lately?

My fellow producers and I talked a lot about levels of access—do we give definitions? Do we do this? Do we do that? I think that we exist in a time and culture that if a word comes up and someone is watching a television screen, they go on a phone to look up cisgender. So we’ve moved beyond that, just a little bit. What was important was to let the audience see and hear from trans people, telling their journeys of becoming. What are the struggles you’re grappling with in a culture that doesn’t quite understand? The folks in this film did such a good job of telling small stories that really illustrated the struggles—and the triumph over that struggle as a trans person in America.

Who is the audience you thought of while working on the film, and what do you want them to take away from it?

Maybe this makes me a bad producer, but I wasn’t thinking so much about what the audience is going to get out of it. As I sat there interviewing them, I wanted each subject to walk away feeling that they were seen and heard. And if I followed that intention, and held that to the core, then the audience would get everything they needed. Of course it’s a piece of education, but not in the sense of ‘Here, let me teach you about my experience,’ something that might be informative but feels like work. I never wanted anyone feeling like they have to watch this to check the box of their wokeness. That’s not why you’re doing this. You’re watching this because these are extremely interesting people who have lived interesting lives, and who are selfless enough to sit there and tell it to you.

This film is on the wave of so much that’s going on—whether that’s backlash or whether that’s cultural visibility and some policy change, good and bad. There is a constellation of experiences that link us, because of our struggle with identity and the body. But all of us are struggling, whether we’re trans or cis. There’s this sense of who the world says we’re supposed to be and who we know we’re supposed to be—and whose vision do we follow? We’re in this stage right now, this post-Trump-figuring-out of what does this mean? What is the other? What are these marginalized people? And what do they want?

Nicole Maines, whose family won a case in the Supreme Court of Maine over bathroom use, takes a selfie with Mock on the set of The Trans List.
Timothy Greenfield-Sanders / Courtesy of HBO

How are you feeling about the political landscape right now, when many minorities are feeling uncertainty about what a Trump presidency means?

It is a time of uncertainty, but we’ve always had times of uncertainty. Transgender movements and transgender activists have always been under immense pressure and backlash. Sure, we would have had better allies [if Hillary Clinton had won]. We had a great last eight years with the Obama Administration. I feel the fear within my community, the fear that we don’t have those partners any more. So we’re going to have to fight. But we’ve always being fighting. The work that has to be done is ensuring that our grassroots trans-led organizations get the resources they need, to fight state by state, in their communities. It just makes it even more clear that we have to continue to support people who are not in these safe havens like New York or L.A. or San Francisco.

What do you think about the way the election turned out?

There was a sense of hearing the election results and not being so surprised. What president-elect Trump campaigned on was this sense that ‘We’re going to take our country back from this multicultural America that has been heralded in media and under the Obama Administration for the last eight years. We’re going to make it right—white—again. So those other people who thought this was their time, they’ve had their time. And now we’re taking this back.’ What we have to do is ensure that all those people who are othered, whether they’re disabled folks, trans folks, undocumented folks, queer folks, women—that everyone bands together to stand up in power, saying we will not be forced to be silent. We will not have our rights taken away. We will develop deep coalitions that are intersectional, that are deliberate, that are clear about the kind of world and kind of country we want to live in.

There is some sense that identity politics undermined liberalism this year and that society has gone too far in supporting sexual and gender minorities. There was a joke on Saturday Night Live recently, for example, about how Tinder added a feature that gives users 37 gender options, and that this feature is called ‘Why Democrats Lost the Election.’

As long as people are targeted because they are sexual and gender minorities—because of their disability and their immigration status—we need to have a politics that centers those identities. I don’t think identity politics are the reason why [Democrats lost]. What happened was that certain white people wanted to take their country back, and they did. They felt this sense that centering all these other people for eight years was too much, and that they were no longer centered. It’s a cute joke, it’s a great way to scapegoat, but the numbers don’t lie, about who turned out and who voted for the man who ran Celebrity Apprentice.

What does being an ally to the trans community look like right now?

I think that the number one thing allies can do—beyond just taking their education upon themselves—is go out and get your people, however you define that. Once you’ve awakened to a certain political consciousness, and you know more now, what allies do is use their access. For me, that might be speaking about social justice in spaces that are a bit more hostile to my own presence and existence, as a trans woman of color. For white allies, they can go and get their people around holiday tables, having these conversations with a problematic uncle and not shirking away from that and leaning into that. Being the Trojan horse is vital at this time. 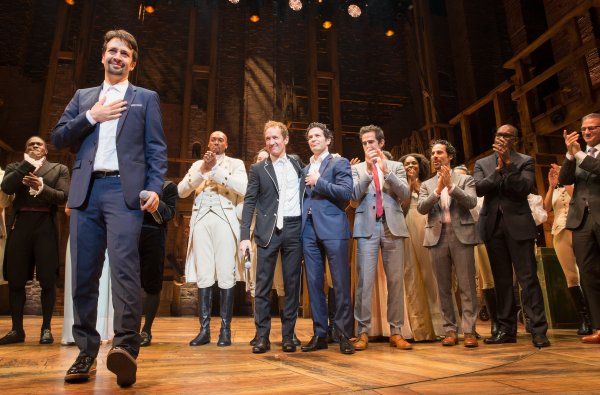 Watch Live Performances of Songs from the Hamilton Mixtape
Next Up: Editor's Pick