The Electricity Lobby Was Behind the First National Christmas Tree Lighting

President Coolidge illuminating the community Christmas tree, south of the White House.
Library of Congress
By Olivia B. Waxman

The annual tradition of lighting a national tree dates back to December 24, 1923, when President Calvin Coolidge pressed a button that lit up more than 2,500 light bulbs strung around a 60-ft.-tall balsam fir tree from his home state of Vermont—reportedly personally felled in “the heart of the Green Mountains” by Middlebury College’s President Paul D. Moody and shipped express to Washington by the school’s alumni.

The Jan. 7, 1924, issue of TIME magazine described the sequence of events: “At 5 p. m. the President pressed a button, lighting the great National Christmas tree rising 60 feet high in the oval south of the White House. A choir from the Epiphany Episcopal Church and a brass quartet of the Marine Band gave a concert.” The write-up, however, also highlighted the discrimination of the time, as “the assembled multitude” first sang carols around 9:00 that evening, and a group of African-American singers were only able to hold their own segregated festivities later in the night.

But the ceremony wasn’t started just to spread holiday cheer and Vermont pride.

President Coolidge illuminating the community Christmas tree, which has been erected south of the White House.
Library of Congress

In fact, the brains behind the event hoped it would help spread electricity use throughout the country. Its mastermind, Frederick M. Feiker, assistant to the Secretary of Commerce Herbert Hoover and former technical journalist for General Electric (GE), described his light bulb moment to his daughter Janet a decade later in a March 8, 1932, letter:

So $5,000—that’s $70,680.99 in 2016 dollars—was collected to install underground lighting cables for the tree’s red, white and green bulbs. And living up to his nickname “Silent Cal,” Coolidge “refused to speak, but he did agree to push the button,” Feiker said. (He also nearly scuttled the 1924 ceremony with his reluctance to cut down a tree, but agreed to the idea if they used a living tree instead.)

While the electrification of the country was underway well before 1923, the ’20s were the “tipping point decade,” as Amity Shlaes, author of Coolidge and chair of the board of the Calvin Coolidge Presidential Foundation, puts it. In 1920, 35% of homes had electricity, and by 1930, 68% did. The Economic History Association estimates that 70% of manufacturing activity relied on electricity by 1929, up from 30% in 1914. Urban homes and businesses were powered by electricity before many rural areas, many of which wouldn’t get access until the Rural Electrification Administration was created under the New Deal.

Looking back, the 1923 tree lighting was also in sync with other trends in that period, historians say.

“The 1920s were a decade of advertising, copywriters, punchy prose, tabloid journalism with splashier photography displays, so we’re getting this visual culture, and both [Presidents] Harding and Coolidge recognized the publicity value of a photo op,” says David Greenberg, author of Calvin Coolidge and a professor of History and of Journalism & Media Studies at Rutgers University. “So it’s easy to imagine the White House tree lighting ceremony was just sort of part of this proliferation of public events at which you get a nice photo in the newspaper for this kind of easy stunt.”

Combine that trend with the glitzy Jazz Age, says historian David Pietrusza, author of several books on Coolidge, and the tree-lighting ceremony fits right in with “the Roaring Twenties—when everything about American society seem to glitter and flicker with a flame never before witnessed.” 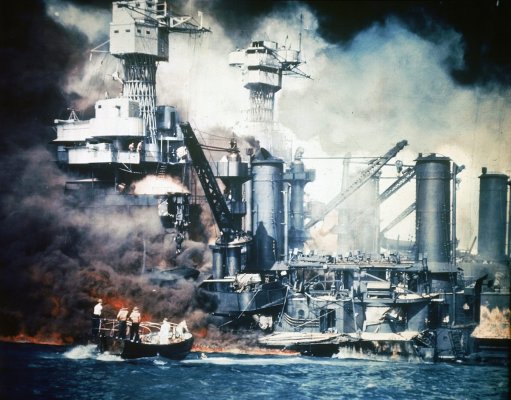 The History Behind the 'Remembering Pearl Harbor' Virtual Reality Experience
Next Up: Editor's Pick