A New York woman who was among several hundred people protesting the Dakota Access pipeline in North Dakota early Monday had her left arm nearly “blown off” during an explosion at the protest site, her father said.

Sophia Wilansky, 21, has been undergoing multiple surgeries to try to save her arm after chaos erupted at Standing Rock about 4:30 a.m. on Monday. Her father, Wayne Wilansky, said his daughter was handing out bottles of water to fellow protesters when police lobbed a concussion grenade, which exploded when it hit her left forearm.

“I died a thousand deaths today and will continue to do so for quite some time,” Wayne Wilansky said in a statement. “I am left without the right words to describe the anguish of watching her look at her now alien arm and hand.”

Morton County Sheriff Kyle Kirchmeier confirmed that there was an “explosion” in the “protester area” although he denies that police threw any sort of device. “We don’t know where it came from, but it wasn’t law enforcement,” he said at a news conference. His office said officials did not use any grenade and said the explosion may had been caused by small propane tanks officials said protestors had set up to explode, according to the Associated Press.

“She saw them throw it right at her. There’s no question,” he added. “This is a weapon of war.”

Sophia Wilansky is in stable condition but faces as many as 20 surgeries over many months to try to keep her arm in tact. Her father says even if she maintains the arm, she will have “very minor function.”

“There are no words to describe the pain of watching my daughter cry,” he said.

Sophia Wilansky is a recent college graduate and environmental activist who has protested other pipelines in the past. She had spent the last three weeks demonstrating at Standing Rock and had planned to stay there all winter. More than 6,000 people have donated at least $180,000 to an online fundraising page created to help her pay for medical bills.

About 300 people were treated for injuries that were a “direct result of excessive force by police,” the Standing Rock Medic and Healer Council said in a statement.

Authorities say at least one person was arrested during the Sunday night clashes. The unidentified individual had breached police barriers, Kirchmeier said. At least one police officer was injured after a protester threw a rock at his head, according to authorities. 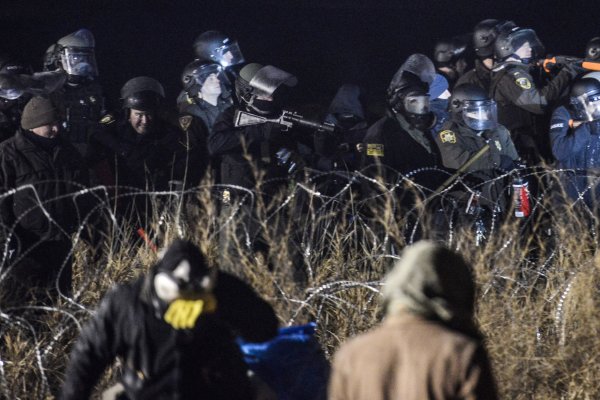 Here's What's Happening With the Dakota Access Pipeline Protests
Next Up: Editor's Pick