On Sunday night, fans finally got answers to some long-simmering Westworld questions. Episode 8, “Trace Decay,” shed light on new details about Bernard, Maeve and the Man in Black, all of which have major implications for the season’s final two episodes. The show hasn’t officially cleared up whatever Arnold has in store for the system-gamers at the center of the maze, but it did drop some not-so-subtle bombs to validate several brewing fan theories throughout.

Here are five vital reveals from the show’s latest installment:

Maeve is a super-host now, and she remembers everything.

Maeve is now whispering voice commands to other hosts and just generally mastering her universe at warp speed. It looks like it will be tough for the park—which is much more aware of her script-flipping now—to hold her at bay. She can now recall the time she and her daughter fell victim to the Man in Black with total clarity, rather than in hazy bursts. (One vivid flashback even spurs her to off the new Clementine, who she never liked anyway.)

She’s questioning Arnold’s identity while observing that it’s almost like she’s of two distinct minds—a possible reference to psychologist Julian Jaynes’ theory of the bicameral system. If she’s torn between avenging her daughter’s death and getting the hell out of there, this episode seems to confirm that the latter drive is winning. Just how far she’ll manage to get remains to be seen, but thanks to her enhanced abilities, she’s cunning enough to outsmart Sylvester, slit his throat, recruit bodies for her militia and plan the specifics of the rebuild she’ll require in order to override the core code that would enslave her forever.

Bernard has at least been temporarily aware of how Ford is using him.

Ford orders Bernard to destroy all evidence tying him to Theresa’s death and get to work on the new narrative. He says he does this to free nerdy demon pawn Bernard of his guilt trip, but it’s really just to keep him loyal and in the dark. Tellingly, even though Ford “erases” Bernard’s memory of Theresa, Bernard appears to be getting wise to the fact that his boss is using him as a killing agent. He remembers that he was the one who tried to strangle Elsie, who very helpfully informed him she was in the creepy theater on a muckraking mission. (We now know that Bernard captured her, but we don’t know if he actually finished the job.)

Ford is alternately impressed and troubled by Bernard’s emotional range as he makes a foreshadowing note: Bernard is poised to be a formidable agent if he were to try overthrowing the park. After all, he knows his own mind and the minds of other hosts. But Ford again brags about icing co-creator Arnold back when he tried to stop him. Like Arnold, Bernard is sympathetic to the hosts. Ultimately, his “heart” is made of putty, which Ford takes pride in before he temporarily turns it to stone.

The Man in Black used to be a non-violent piece of work.

With his general air of smugness, The Man in Black triggers Teddy into remembering that he has repeatedly dragged Dolores into the barn, against her will, to commit unseen violence against her. And once Teddy beats him into coughing up the details on his own real backstory, we learn that the Man in Black went on a rampage because after his wife’s suicide—allegedly committed because of the terror of living under her husband’s grip—he wanted to see just how much of a monster he could be. He says that when he made Maeve grieve for her daughter, it seemed to animate her into consciousness, at which point the maze winked at him from afar. Even though Teddy knows that the Man in Black hurt his beloved, he still can’t quite seem to pull the trigger and kill him.

On their vision quest, the two encounter a minotaur who Teddy manages, with difficulty, to fell with an ax, but it’s Angela, a member of Wyatt’s crew who poses as his weeping victim, who seems to be the most pivotal character here. Two interesting things about her appearance: 1) Teddy wasn’t just soldier buddies with Wyatt (an apparent last-minute Ford creation). She claims he got evil with Wyatt’s band of scary guys and it’s time for him to come back. 2) We’ve seen Angela before as the worry-free greeter who got William suited up cowboy-style. Here—possibly because the timelines differ—she appears to have been repurposed as a host player.

Dolores is questioning her reality.

Led by Arnold’s voice, Dolores appears to arrive “home,” the place where it all began under Arnold’s command. The flashback pops up as a group of hosts learn to dance awkwardly in the early days of the park. Dolores seems to recall her old self gunning down the village and taking her own life. (Conveniently, this is also the site of Ford’s new narrative.) Last time we checked, Dolores had been full of purpose, but now she’s in meltdown mode, envisioning her death in a whole cornucopia of sad scenarios. Either Ford or Arnold or the simple fact of life in Westworld itself are manipulating her majorly, sending Dolores into reveries that make her question everything about her time and place. Chief among Dolores’ questions is “When are we?” But only the little girl, Lawrence’s daughter, seems to know what’s going on—unlike pretty much everyone else in this joint.

Hale still seems determined to get control of Ford’s data.

Ford has gone to great lengths to cover up Theresa’s death, even throwing in a bold death threat to Charlotte Hale. Seemingly undeterred, Hale turns to Lee Sizemore for help in her scheme of sabotage. He’s pretty much all she’s got, so like a team captain stuck with that last obnoxious kid in dodgeball, she tells him to write a story for Abernathy (formerly Dolores’ dad) who will be instrumental in the mission to seize Ford’s power. She plans to use Abernathy’s brain as a kind of external hard drive for the park’s valuable data for Delos. He’s either a worrisome or a strategic selection, because he’s infected enough to hunger for revenge. Hauntingly, Hale says “even the dead fulfill a purpose,” ominously quoting (more or less) The Lion King. On the bright side, total waste of space Sizemore can feel indispensable now. Major congrats to him on the newfound self-worth.

The flies are buzzing around Wyatt’s victims’ bodies, possibly because they “trace decay” in the hosts, but also perhaps because they carry a virus that leads the hosts to break down. (Recall how the camera once lingered on a shot of a fly landing on Dolores’ neck—which she promptly extinguished.)

In a past life, Maeve attempted to kill herself with yet another one of her conveniently located sharp objects. The events that follow prove that when Ford “erased her memory,” to Arnold’s apparent theme song, it didn’t work. Further, when Maeve says, “this pain it’s all I have left of her,” it echoes lines that her fellow hosts Bernard and Dolores have said. It all hints at the possibility that pain or deep emotion can launch evolution among the androids.

When the Man in Black brags that Westworld isn’t the only world he reigns, it’s likely because he’s a big shot in real life. But it’s not out of the question that he has a financial stake in other parks like the ones introduced in Michael Crichton’s 1973 film.

It may be an error on Ford’s part to have the creative brains behind the hosts (Bernard) also be a killing agent, because Stubbs is onto Bernard for his zero-care attitude toward Theresa’s death.

In this episode, the humorless Sylvester jokes that he might be able to give Madam of Mayhem Maeve a better sense of humor about her doomed situation. Maeve did have a low humor count, but that doesn’t seem fair because the woman has had some real zingers. 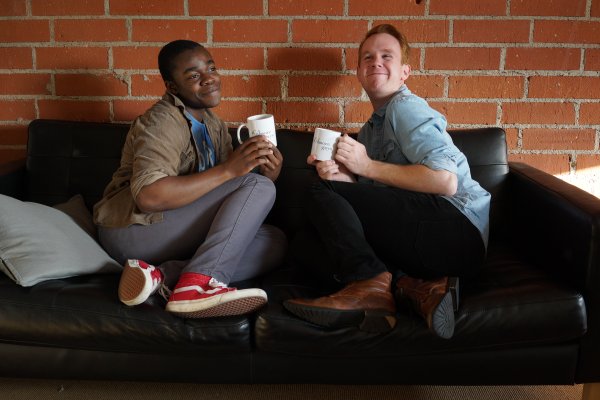