A senior delegate at the 2000 Democratic National Convention.
Ed Kashi
By Ed Kashi and Gabriel Ellison-Scowcroft

Photographs have had, in past elections, a tremendous impact on people’s perception of presidential candidates. The election of Barack Obama in 2008 is a good example. Damon Winter won a Pulitzer Prize for his coverage, which included so many unique and iconic pictures. But when I think back over the past year-and-a-half of political coverage, no particular photograph or photographer stands out.

Images seemed less significant in this election cycle. Social media is what people reacted to. Tweets mattered, not pictures. Almost every day would begin with something about or by Donald Trump, which would then set the agenda. It was as if there was less time to absorb imagery because there were so many distractions.

There are the images of Trump angrily shouting into a microphone, but all of those pictures are really the same picture. Not one stands out. I’m not trying to say that photographers have produced bad work during this election. On the contrary: there has been some exceptional work by VII photographers Danny Wilcox Frazier, Ron Haviv and Christopher Morris, or the incredible work of Mark Peterson who etched out a complete vision of politics that is brutal yet beautiful, or Ben Lowy’s powerful imagery from the Republican Convention. Their work represents the power of authorship and artistic vision, but for the general public what value did it have? I’m increasingly wondering how and why some of the best photographic work doesn’t seem to move the needle on public understanding, with none of it rising to the surface in the way it has in the past. Perhaps Trump was just too loud and the media too tone deaf.

I don’t know what conclusions to draw from this. There is the obvious question of why Trump was given so much free coverage. He successfully manipulated so many publications and broadcast outlets, let alone the wild, free-ranging world of the internet, with his headline-grabbing tweets. But ultimately this is a question for us photographers to ponder: why did images matter less? What can we do to ensure that this doesn’t happen again? How do we evolve in a changing media and social media landscape?

We, as journalists, have also failed to get the stories that matter to the people that need to hear them. Never in my lifetime has there been such a vastly different interpretation of the facts. The blame does not lie squarely on our shoulders – what with social media algorithms that send us into echo chambers of our own beliefs – but now that we know the extent of the damage, we have a responsibility to act and change. It is alarming that even though we live in a time where access to information is easier than it has ever been before, so many people live within a closed loop of falsehoods. This includes those of us on both sides of the political spectrum.

It is time to start thinking more critically about how we characterize our subjects, especially if we want to reach a wider audience and have real impact. Americans living in rural areas voted overwhelmingly for Trump. That doesn’t make them ignorant or racist, even if the person they voted for is often viewed as embodying both of those qualities. It is important to remember that these are the people who built America. They mined the resources that provided this country with energy. They grow the food that this country relies on today. They build the machines that drive our nation and run our factories. But the world is changing quickly and they are being left behind to fend for themselves. Instead of looking at these folks in a pejorative way, we need to look at their lives and try to tell their stories in a way that demonstrates the historical significance of what they and their ancestors have done, and the desperate need for investment and retraining that they need and deserve. The same holds true for the marginalized communities in this country, both on rural native lands and in our blighted urban areas, where too often racial minorities live. They also desperately need more investment in education, healthcare, security, housing: the basics of a civil and fair society.

The areas that voted for Trump are part of the fabric of what makes this country great, and in many ways inspiring for all of humanity. Rural and suburban folk, just like those who live in the cities, want a better future for their families, decent paying jobs and a right to liberty. It is up to journalists and visual storytellers to get them the information they need to make informed decisions. We need to be able to cut through the disinformation firewall that has risen across so much of America and quite frankly divided us in unnatural ways. We’ve got to ask more of ourselves as storytellers and we’ve got to search for more inclusive media channels to share our work.

So here is my plea to journalists and visual storytellers: go out and use your voices to tell the stories of these communities. They need your help. Our democracy needs your help. Donald Trump ran on a platform of being a hate-monger, a misogynist and a race-baiter. He has conned America, and our ire—or more appropriately our critical minds—should be directed at him, not at those who voted for him. Better yet, channel your energy into finding common ground so we can start to agree on things and engender more empathy and understanding towards each other. While we as journalists can’t do this alone, we can contribute greatly to healing our divided society. It’s time to abandon the tropes that have been so damaging to our society and get to work telling stories that inform and help people make the best decisions they can possibly make. It is incumbent on us to understand each other for who we really are, what we care about, what are our real problems, hopes and needs.

Ed Kashi is a photojournalist and filmmaker based in New Jersey. He is represented by VII Photo.

Gabriel Ellison-Scowcroft is a photographer based in San Diego. 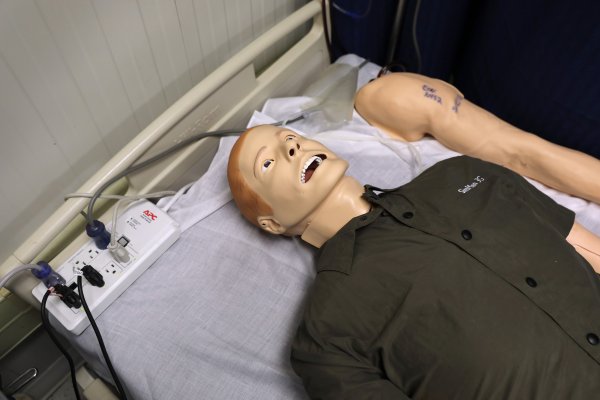 Still Lifes from Guantanamo Bay
Next Up: Editor's Pick