Wikileaks Founder Julian Assange has overtaken President-elect Donald Trump for the lead in the online poll of who readers think should be TIME’s Person of the Year in 2016, as of 1:00 p.m. Eastern on Monday.

On Monday morning, Assange and Trump were deadlocked with 9% of all the “yes” votes cast by participants, but Assange pulled ahead to 10% shortly after noon.

Wikileaks made headlines regularly during recent months by releasing a steady trickle of information throughout the 2016 presidential election, including leaked internal Democratic National Committee correspondence and messages from the account of Hillary Clinton’s campaign manager John Podesta. Earlier in the year, a United Nations panel found that Assange had been “arbitrarily detained” in London, where he remains in the Ecuadorian embassy in fear of being extradited to Sweden and being charged with rape if he leaves.

It’s worth noting that the poll presents people alphabetically, so Assange is the first option participants consider and Trump comes near the end of the poll.

Each year, TIME selects the person who has, for better or for worse, impacted the news the most in the past year. The magazine’s editors always make the final Person of the Year selection, but this poll is a way for readers to voice their own opinions on who has made the greatest impact on the world in 2016. For 2016, TIME—in partnership with Opentopic and IBM’s Watson—is also able to track and compare influence in a whole new way. Opentopic worked with Watson to track how candidates made their mark on the Internet, in order to create a picture of what the world is saying about the people and ideas that matter. TIME’s editors used this information while finalizing the list for the Person of the Year reader poll. 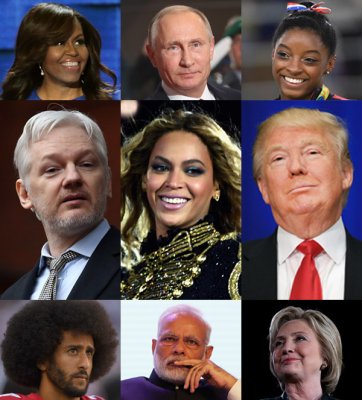