Astronauts Have Been Celebrating Thanksgiving in Space Since 1973. Here's How

As Thanksgiving approaches, time-honored, turkey-centric celebrations will assuredly take place wherever Americans happen to be come Thursday—even if that location happens to be somewhere in outer space.

Celebrating American Thanksgiving on the Final Frontier has been a tradition of the United State’s space program for decades. The first American astronauts to be in space on Turkey Day were Commander Gerald P. Carr, scientist Edward G. Gibson and pilot William R. Pogue. They comprised the three-man team sent on the third manned mission to America’s first space station, Skylab, in 1973.

The crew marked Thanksgiving by undertaking the then-longest space walk, spending six and a half hours bouncing around like their own Macy’s parade balloons while replacing the film in solar study cameras and repairing an earth-sensing instrument. Afterwards, as William Pogue recalled, “there was still visible twilight several hours later… and while we had our turkey that evening, we were able to look out the window” to the Earth glittering below.

Unsurprisingly, the Skylab turkey was decidedly different from the golden-roasted Norman Rockwell clichés that mark Thanksgiving dinners back in the USA. Food scientists at the National Aeronautics and Space Administration (NASA) had been struggling with how to make meals that kept astronauts both healthy and happy since the space program began in 1958. These scientists quickly learned that crumbs in zero gravity caused major problems, meat in tubes and freeze-dried powders were completely unappetizing, and gelatinous, bite-size cubes of food were never the right way to go.

This first Skylab Thanksgiving came after the Apollo missions, which not only took giant leaps for mankind, but also substantially improved the quality of space fare. Where previously most astronaut foods were freeze-dried to avoid the need for refrigeration, the Apollo mission team introduced “wet-packs” to the space program, which were “regular, undehydrated food wrapped in aluminum foil.” Although such entrees were a step up from other rehydrated foods, they unfortunately still had to be eaten cold because space shuttles at the time didn’t yet have ovens.

Amongst these important culinary improvements was the quality of space turkey. The bird, when packed in gravy, became an essential part of the menu for Apollo missions 11-16 and was one of just a handful of main entrees available to the crew while they were in space. (The other dishes included ham and potatoes, chicken and rice, beef stew, and tuna salad.) The astronauts of Apollo 8, the first manned space craft to orbit the moon, enjoyed a specially packed dish of turkey on Christmas day, while the crew of the later Apollo 12 mission, the second group to land on the moon, enjoyed this turkey with gravy as part of a Thanksgiving dinner spent in quarantine after landing back on Earth a few days earlier in 1969.

By the time Skylab 3 was launched, space shuttles had grown more spacious—so, in addition to relatively more sumptuous turkey dinners, the crew was also one of the first to enjoy a full dining room and table on board. Thanksgiving in 1973 was thus spent with their feet in footholds around a table, cutting open food packets with their assigned scissors, and giving thanks while enjoying the spectacular view.

Every year since, when an American has been in space, the Thanksgiving festivities have followed accordingly. In 1985, astronauts aboard a shuttle mission enjoyed some irradiated turkey while the crew of the space shuttle Atlantis in 1991 “gobbled up turkey, gravy, noodles, cranberry sauce and a dish called ‘pumpkin delight’” after successfully maneuvering their craft around some nearby space “junk.”

In the past decade, Space Thanksgivings have become an almost annual affair thanks to a more or less permanent American presence on board the International Space Station. Since 2007, these feasts have been brought to the final frontier thanks to the fine folks at the Space Food Research Facility at Texas A&M in College Station, Texas. The research facility’s recent holiday menus have included dishes like irradiated smoked turkey slices, freeze-dried cornbread, thermostabilized candied yams, mashed potatoes (no gravy anymore, unfortunately), cranberry pie and apricot cobbler.

The verdict of these space feasts from the food scientists: “It’s just like Thanksgiving dinner.” According to the astronauts themselves—let’s just say they’re mainly thankful for this opportunity to be in outer space. 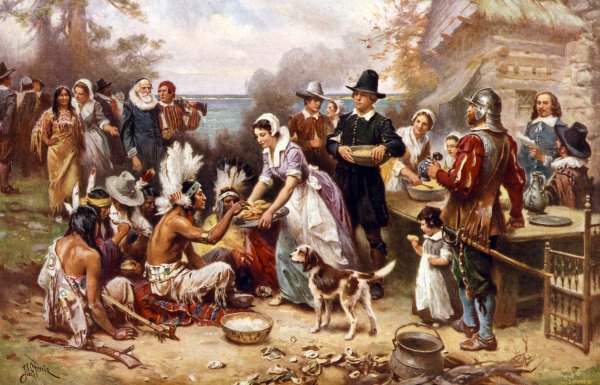 What We Really Know About the First Thanksgiving
Next Up: Editor's Pick