Serena Williams may have won 22 Grand Slams, but nothing compares to the challenge of performing next to Beyoncé.

The tennis player, who dances alongside the singer in her visual album Lemonade, joined Bey onstage for the final night of the Formation World Tour. During an interview with Ellen DeGeneres on Ellen, Williams said that the crowd at the show dwarfed the number of people who watch her tennis matches—and the pressure got to her.

“I’ve performed tennis-wise in front of thousands of people but not, like, crowds that huge,” she said. “So all I could think was, ‘Serena, don’t miss your note. Don’t miss your note.’ And what did I do? I missed my note! I was like, ‘God dang it!’ But then I was like, ‘OK, this is so fun. I don’t want to leave. I don’t want to leave,’ so I was trying to stay out there extra deep but eventually they told me in my ear, ‘Serena, get off the stage.'”

Williams appeared on Ellen to promote the opening of the Compton-based Yetunde Price Resource Center, named after her eldest sister, who was killed by gun violence. The center aims to connect families affected by gun violence with service providers. 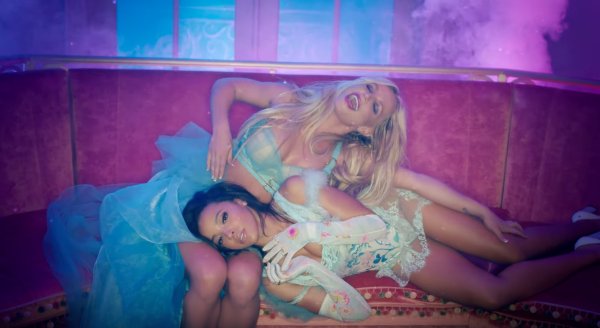 Watch Britney Spears and Tinashe Live It Up In the Hot New Video for 'Slumber Party'
Next Up: Editor's Pick