Here's How Likely You Are to Die Young

Pop quiz: What are the most important numbers to know when it comes to your risk of heart disease? You might say your blood pressure, or cholesterol, or weight—and all of those can be valuable clues. But according to researchers, there may be another figure that’s equally important: your so-called fitness number.

In a new study, this easy-to-do calculation was enough to accurately predict participants’ risk of premature death from cardiovascular diseases and other causes. “With the increase in lifestyle-related diseases around the world, estimated fitness is an easy, cost-effective method that could significantly help medical professionals identify people at high risk,” said co-author Carl J. Lavie, MD, professor of medicine at the John Ochsner Heart and Vascular Institute, in a press release.

Exercise-related variables aren’t typically used to calculate risk for conditions like heart disease—even though poor physical fitness is a known risk factor. That’s probably because gauging someone’s fitness level often involves expensive and time-consuming testing procedures, such as running on a treadmill to determine measurements like oxygen capacity. But Dr. Lavie and his colleagues say that a much simpler calculation can be made with info most people have readily available, including their age, height, weight, waist circumference, and resting pulse.

Health.com: This Is What Happens to Your Body When You Stop Exercising

Co-authors Javaid Nauman, PhD, and Bjarne Nes, PhD—both researchers at the Norwegian University of Science and Technology—noted in the press release that there are big advantages to using this calculation, since it eliminates the need for complicated algorithms traditionally used to compute risk.

The study, published in Mayo Clinic Proceedings, included health data from 38,480 men and women who were followed for up to 16 years. Over that time, 3,863 of the participants died, 1,133 from cardiovascular disease.

When the researchers divided people into groups based on their estimated fitness, they found that those who were the least fit had a 50% higher risk of dying of heart disease over the course of the study, compared to those who were the most fit. In fact, every incremental increase in fitness level was associated with an 18% and 15% lower risk of heart-related death in men and women, respectively. The least fit participants were also more likely to die from any cause.

The researchers also looked at traditional factors used to estimate risk of early death, such as high blood pressure and cholesterol. It turned out that adding those variables did not improve the accuracy of their predictions in a statistically meaningful way, compared to their predictions based on fitness alone.

In a video produced by the journal, Nauman explained that blood pressure and cholesterol may be directly related to fitness level, and may help explain the relationship between low fitness level and higher risk of death. This finding “further highlights the importance to intervene at the fitness level for the primary prevention of cardiovascular disease,” he said.

So how do you calculate your own fitness number? It’s simple: The researchers have created a free tool, available at worldfitnesslevel.org, or as apps from Google Play and the Apple Store. With a few clicks, you can learn both your estimated fitness level and how you stack up with other people who are the same age and gender.

The researchers concluded their study by noting that estimated fitness level—in consideration with other risk factors such as smoking status, alcohol consumption, and other health conditions—could have a major impact on identifying people at risk for future cardiovascular disease.

Pamela Peeke, MD, spokesperson for the American College of Sports Medicine and author of Fit to Live, agrees that “you don’t need a slew of tests” to predict future heart problems—and that physical activity alone can be a very good estimate.

“No model is perfect and, as the authors note, people must use recall for their physical activity,” she told Health. “However, regular exercisers have no problem telling you about their level of activity.”

“This is a provocative study that provides a simple tool that providers and consumers alike can use for a quick and effective idea of how they stand with regard to their cardiac risk,” added Dr. Peeke, who was not involved in the study but has used the fitness number formula in her own research.

“It is a wake-up call to any person who is trying to understand where they stand in terms of their own cardiovascular risk,” she says. “You may find that you’re in great shape, or that you’re at a much higher risk than you’d ever thought. This hopefully then is transformed into a call to action for that person to improve their risk score.” 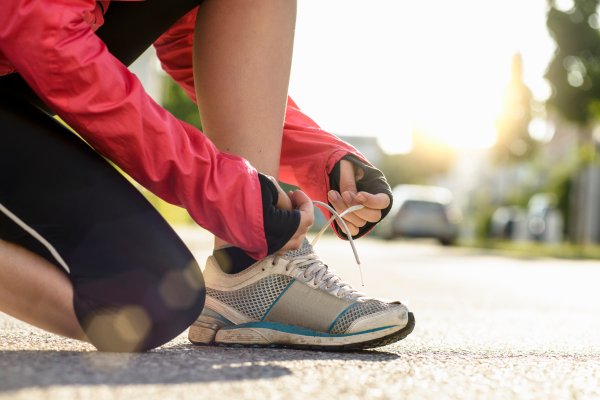 Lighter Running Shoes Really Can Make You Faster
Next Up: Editor's Pick