How Amy Schumer Gets Guys To Think Feminists Are Funny

We’ve finally settled the ridiculous question “are women funny?” Bridesmaids and Tina Fey ended that conversation years ago. But critics continue to debate whether feminism and comedy can go together. And, even if they do, can a feminist comic draw a wide audience?

The answer is yes, and then some. On Tuesday, the second season of Inside Amy Schumer premieres on Comedy Central, a network that has spent the last year proving men will watch comedies with a feminist message. Inside Amy Schumer—featuring sketches, standup and interviews from comic Amy Schumer—had Comedy Central’s most-watched series premiere in all of 2013, even though the network’s audience is 60 percent male. The show drew in a 50/50 male-female demographic throughout its first season last year and even scored better ratings than Comedy Central’s other new show in 2013, The Kroll Show, beating it by 12 percent in the male ages 18-34 demographic.

The numbers are surprising considering that almost every sketch on Schumer’s show comments on gender politics in some way. A famous sketch from last season featured a group of female friends meeting on the street, each offering compliments to each other as they met. Every woman who received a compliment would respond with self-deprecation. When one woman finally just said thank you without putting herself down, the rest of the women committed mass suicide. The sketch is hilarious, true-to-life and critiques the conflict between the high bar women set for themselves and their inability to accept praise (like a man would). In another sketch, Schumer visits “O’Nutters,” a male version of Hooters where the waiters wear ball-hugging uniforms. And they get crazier from there:

This season promises to be even more politically charged. It begins with a sketch in which a focus group made up of men analyzing Inside Amy Schumer begins to discuss whether they would have sex with her. Schumer, watching from the other side of one-way glass, shrugs off the negative comments and reassures herself: “A couple of them said they would bang me?” Another new sketch shows Schumer playing a Call of Duty-like video game in which her female avatar is raped by a superior officer and then pressured into not reporting her sexual assault by prompts in the game: “You were just assaulted by a fellow soldier. Do you wish to report?” “Yes.” “Are you sure? Did you know he has a family? Does that change your mind about reporting?”

Dudes can be quite protective of their first-person shooter video games, so what is it that is making men flock to such a feminist show?

Her observation isn’t all that different from what has been written about another new Comedy Central show featuring two female leads: Broad City. Like Inside Amy Schumer, Broad City takes feminist issues head on. In an early webisode (the Comedy Central show was born out of an online sketch show), the two women (Ilana and Abbi) critique cat calls by taking them to an extreme before breaking out into dance in a parody of Spike Lee’s Do the Right Thing.

In a Broad City episode from its first season on Comedy Central this year, the two declare themselves “feminist heroes” as they ask out dozens of men on Facebook because they’re tired of waiting to be courted. (They get rejected by every guy and one girl.) And in yet another scene, Ilana videochats about her terrible sexual experiences to Abbi while the guy is still in bed with her, turning the tables on the women-as-disposable-objects trope.

But between these scenes, we see the characters hiding marijuana in their crotches in order to avoid police on the subway, stealing people’s dogs while dog walking and being chastised for their inappropriate outfits (read: crop top and jean shorts) to work. It’s what the Wall Street Journal dubbed “sneak-attack feminism,” which sounds pretty close to “sneakily feminist.”

So do we have to disguise feminism in our TV shows in order to market shows starring feminists to male audiences?

Inside Amy Schumer has often been compared with Louis C.K.’s Louie or Dave Chappelle’s The Chapelle Show, while Broad City has been called a female Workaholics. While it’s lazy to say that these comedies are female versions of these shows, that’s surely how network execs pitched and discussed them.

A more positive spin on this rise in female comedies? Networks are learning that if you write funny comedies then people will watch them. It’s not that the writers are disguising their feminism; they are just prioritizing comedy first. When asked about inserting feminist messages into the show, Broad City’s Ilana Glazer told Salon, “We definitely hope to make people laugh and bring joy or something to people’s lives, but it would be too prohibitive to write — to aim — for some goal other than the big thing of we just want to make the best episode possible.”

And as the “female Louie” or “female Workaholics” terminology hopefully fades away, what remains are shows about all types of women, not just a certain type of woman.

Up until now there have only been a few ways in which women were “allowed to be funny” on mainstream television. For the last decade or so, Tina Fey and Amy Poehler have blazed the trail for female comedians. Though Liz Lemon and Leslie Knope are two very different characters in many ways—Liz is mildly depressed, sexually repressed and a general mess (see: night cheese), while Leslie is optimistic to a fault, makes PowerPoint presentations about her husband’s butt and prides herself on her organized binders—they also share some key characteristics. Both are work obsessed, a little neurotic and tend to quote feminist platitudes. Their ambition and womanly pride are played for jokes: Liz’s feminist sketches were laughed out of the writers’ room on TGS—sketches that could make it on to Schumer’s show now.

Inside Amy Schumer and Broad City are shows in which the main characters subvert this neurotic female archetype. Broad City’s Abbi and Ilana are stoner screw-ups, and Amy Schumer usually plays a ditzy, promiscuous, insecure version of herself on the show. Liz and Leslie represent what hard-working women were striving towards. Abbi, Ilana and Amy don’t have to meet such high standard for themselves (or all womanhood). They just are who they are.

That’s not to say that Liz and Leslie aren’t amazing characters and that Poehler and Fey don’t have a place in this new wave of female comedies. In fact, Poehler acts as executive producer for Broad City. (Abbi Jacobson and Ilana Glazer of Broad City are Upright Citizens Brigade alumni, just like Poehler). In an interview on Poehler’s “Smart Girls at the Party” video series, Glazer said that they liked the double meaning of the term “broad” when they came up with the name: “Broad is like this full woman. [She] knows what she wants, knows who she is, and is doing the best she can.”

The trick, then, is to get a “broad” range of “full” women on TV. These two shows happen to be on brand with Comedy Central’s other offerings. Future shows on other networks may give us very different female characters with different senses of humor. But what we have learned from Inside Amy Schumer and Broad City is if the female characters are funny, guys will tune in. 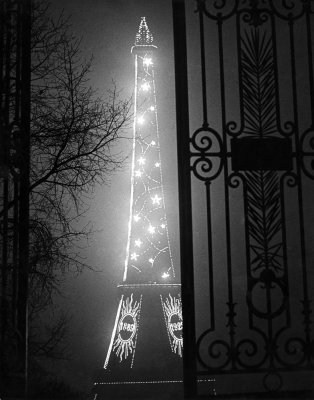 Brassaï in Paris: A Photographer's Love Letter to the City of Light
Next Up: Editor's Pick