What to Know About Donald Trump’s Choice for CIA Chief, Mike Pompeo

Trump said Pompeo “will be a brilliant and unrelenting leader for our intelligence community to ensure the safety of Americans and our allies,” pending the Senate confirmation required for his new post.

Here’s what you need to know about Pompeo.

Pompeo is a West Point graduate and served as a cavalry officer in the Army from 1986 to 1991. He’s also a graduate of Harvard Law School where he was an editor at the Harvard Law Review. After law school, he founded a company and worked in the business world in Kansas until he was elected to Congress in 2010.

Pompeo is a member of the Tea Party movement, and in Congress opposes the Affordable Care Act and supported the federal government shutdown. He serves on the Energy and Commerce Committee and the House Intelligence Committee, and in 2014 joined the House Select Benghazi Committee to investigate the 2012 attack in Libya. He felt the Benghazi committee, which didn’t find evidence of wrongdoing by President Obama or then-Secretary of State Hillary Clinton, wasn’t harsh enough on Clinton. In an addendum to the committee’s report, he wrote that the State Department was “seemingly more concerned with politics and Secretary Clinton’s legacy than with protecting its people in Benghazi,” according to the New York Times.

Pompeo supported Florida Sen. Marco Rubio in the primary and tepidly supported Trump in the general, saying he “will support the nominee of the Republican Party because Hillary Clinton cannot be president of the United States.” But he became friendly with Trump and his campaign, CNN reports, and the two men have espoused similar views on certain issues. Pompeo strongly denounced Obama’s Iran nuclear deal, writing in a 2016 op-ed for Fox News that the U.S. should “walk away from this deal.” Trump has called the Iran deal “the worst deal ever negotiated.” In 2013, Pompeo gave a speech on the House floor arguing that American Muslims are “potentially complicit” in terrorist attacks if they do not speak out against violence in the name of Islam. This foreshadowed a theme Trump carried throughout his campaign: “One of the problems we have is the people in the community, the Muslim community are not turning over the sickos,” Trump said in June, Buzzfeed reports. 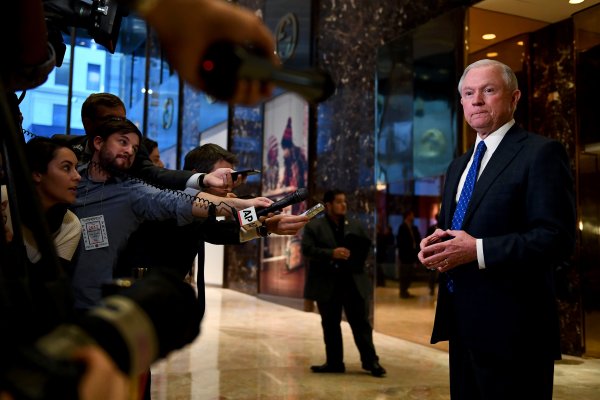 Trump Picked Jeff Sessions for Attorney General. Here's What He Believes on 3 Key Issues
Next Up: Editor's Pick