A Tribe Called Quest’s latest — and what they deem their final — album We Got it From Here…Thank You 4 Your Service couldn’t have come at a more fitting time.

Although the album was recorded before the presidential election, it dropped was just three days after the election results were announced, making the politically charged themes all the more relevant, a fact that’s not lost on the group’s “We the People” video, which dropped on Thursday night.

The powerful video features Q-Tip, Jarobi White, and Busta Rhymes addressing issues ranging like oppression, xenophobia, misogyny and homophobia as a large graffiti mural of the late Phife Dawg watches from the side of a building.

A Tribe Called Quest performed “We the People” with Busta Rhymes and Consequence last week during their appearance as musical guests on Saturday Night Live; watch the music video for “We the People” below. 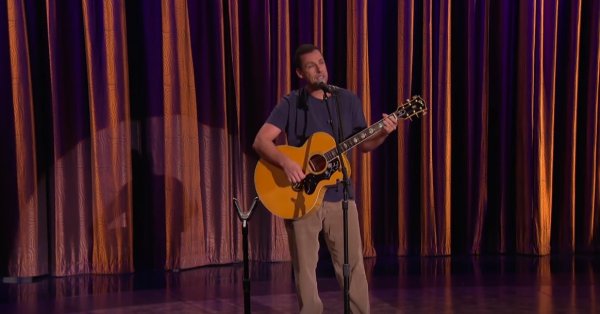 Watch Adam Sandler Bid Farewell to an Old Chair With a Hilarious New Song
Next Up: Editor's Pick