The iconic dress Marilyn Monroe wore to sing ‘Happy Birthday’ to President John F. Kennedy has been sold for a record breaking $4.8million, making it the most expensive dress to be sold at auction.

At Thursday evening’s auction in Los Angeles, the garment was sold to international museum chain Ripley’s Believe It Or Not who will display it at their Hollywood branch before exhibiting it at its outlets around the world, the Guardian reports. The custom-made Jean Louis dress features over 2,500 hand stitched crystals on a flesh colored bodice, rumored to be so tight that Monroe had to be sewn into it. Edward Meyer, vice-president of Ripley’s Believe It Or Not, told the Press Association: “We believe this is the most iconic piece of pop culture that there is.”

Monroe wore it as she serenaded Kennedy for his 45th birthday at Madison Square Gardens, a sultry performance that would go on to spark rumors of a romance between the two. As TIME reported on the event in 1962, “Marilyn who was the hit of the evening, and Kennedy plainly meant it when he said, ‘I can now retire from politics after having had Happy Birthday sung to me in such a sweet, wholesome way.'”

The sale of Monroe’s gown surpasses the previous record for the most expensive dress sold at auction, which was also worn by the actress when she starred in The Seven Year Itch in 1955. Actress Debbie Reynolds bought the white halter-neck dress for $4.6 million at a 2011 auction. 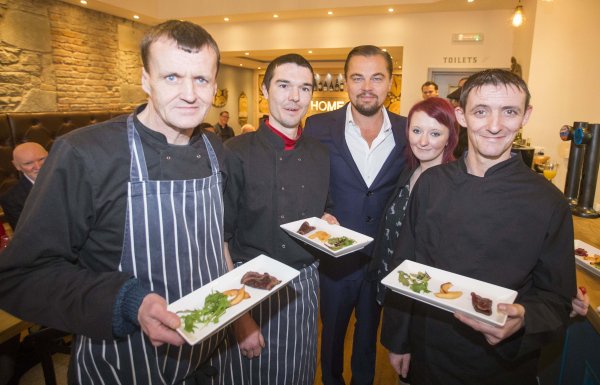 Leonardo DiCaprio Dines at Restaurant Run by Former Homeless
Next Up: Editor's Pick