U.N. Special Rapporteur on human rights of migrants François Crépeau delivers his speech during a session of the U.N. Human Rights Council on June 15, 2015, in Geneva
Fabrice Coffrini—AFP/Getty Images
By Tekendra Parmar

The U.N. Special Rapporteur for the human rights of migrants, François Crépeau, has described the conditions on the Pacific island of Nauru — where Australia runs an offshore immigration detention center — as “cruel, inhuman and degrading.”

His remarks came after the completion of his 18-day visit to Australia and Nauru.

Earlier this year, the Guardian reported at least two refugees self-immolated on the island and that at least six others had attempted suicide in a matter of days.

The Australian government’s policy of detaining undocumented asylum seekers who arrive by boat in offshore processing centers has long been a subject of controversy.

Earlier this month, Australia and the U.S. agreed to resettle many of the refugees held in Australia’s offshore centers in the U.S. 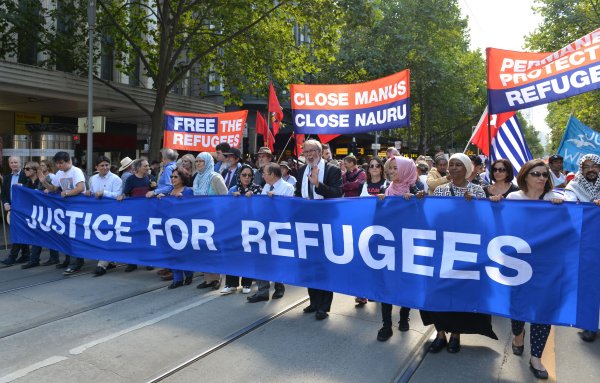 Australia and U.S. Close to Deal on Refugee Swap
Next Up: Editor's Pick