Actress Zoe Kazan Opens Up About Living With Anorexia

Zoe Kazan suffered from a serious eating disorder when she was younger, as she revealed in a powerful first-person essay for the New York Times.

The Our Brand Is Crisis star discussed the depths of her anorexia as a 19-year-old college student, subsisting on 500 calories a day.

“For a year and a half, I had been struggling with a bout of anorexia that had knocked 20 pounds off my already slim frame,” she said. “I had to be weighed multiple times a week at the medical center at Yale, where I went to school, and I saw a therapist almost as often.”

She explained, “The causes for my eating disorder ran along the usual lines: depression, an inability to express my rage, a desire to exert control, a desire to feel less, a desire to have my body express the things my voice could not. That, and I had gotten in the habit of believing it was better to take up less space.”

The essay also mentioned the role Kazan’s first love played in her road to recovery.

“Love didn’t make me better, but it made me happier,” wrote Kazan, now 33. She said she would eat food cooked by her boyfriend to make it seem like nothing was wrong.

While she put on a little weight from his meals, a summer break spent apart lead her to backslide.

“Now, no one was watching,” the actress said. “No one was weighing me. I was the only arbiter of my body.”

By the time she met up with her boyfriend again, her descent into unhealthy behavior had become obvious. He asked about her changing figure, and she had to admit the truth.

“Dragging the terrible thing into the light can strip it of its potency,” wrote the actress. “I didn’t get better all at once — it took years for me to stop counting calories, stop needing a system to get through a meal. Years to get my brain back.”

She added, “But I set a change in motion that night, by telling that one person: This is me. I’m not perfect. Can you still love me?” 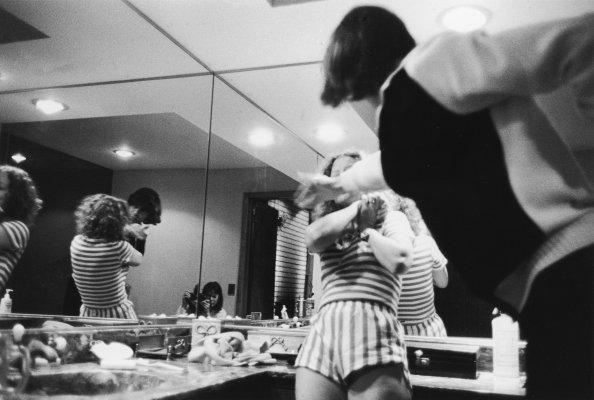 This Photograph Put a Face on the Epidemic of Domestic Violence
Next Up: Editor's Pick