Photographer Harry Benson Once Told Donald Trump: 'You Should Run for President'

Two years ago, as Harry Benson was photographing Donald Trump, he had a suggestion for the reality TV star: “You should run for president. I said that to him.”

Speaking at the launch of TIME’s exploration of the 100 most influential photographs of all-time, Benson mused at a career lasting more than six decades starting with his iconic photograph of the Beatles’ pillow fight–a photograph that helped lift America’s morale just 11 weeks after John F. Kennedy’s assassination.

Kennedy was just one of the many presidents Benson photographed. In fact, he has had every U.S. president since Dwight D. Eisenhower sit for him, including president-elect Trump. Recalling his time with them, he said of Richard Nixon: “I liked him,” Barack Obama was “very cold,” George W. Bush was “a good looking man” and Bill Clinton was “very sexual.”

But Trump is not like any other president, added Benson, who has photographed the millionaire-mogul for the last 40 years. The photographer remembered a portrait shot in one of Trump’s casinos. “He told me, I can go over to that cage and take a million dollars any time I want.’ I said: ‘You know I’ve never seen a million dollars in my life, would you get it and we can do a picture of you holding a million dollars? ‘ He said: ‘You got it.”

Benson also had something to say about future first lady Melania Trump, who had posed for him next to her husband in a revealing dress, against the backdrop of a gold-gilt ballroom. Benson joked that he wouldn’t have got that shot with Pat Nixon or Rosalind Carter and added: “Mimi Eisenhower never posed like that.” 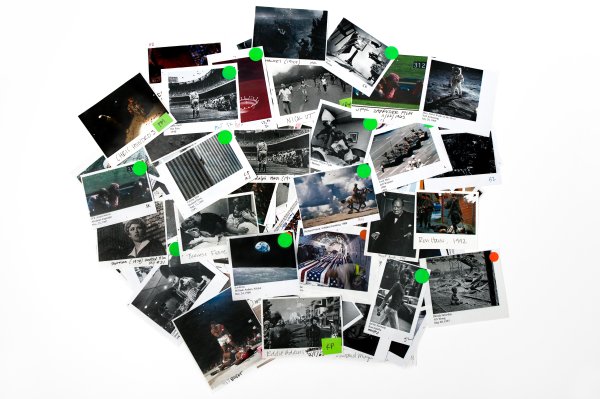 The Story Behind TIME's 100 Most Influential Photos
Next Up: Editor's Pick