Acting on Climate Change Is Actually Where the Money Is

Ice floats near the coast of West Antarctica as seen from a NASA Operation IceBridge airplane on Oct. 27. Researchers have used IceBridge data from the past eight years to observe that the West Antarctic Ice Sheet may be in a state of irreversible decline directly contributing to rising sea levels. NASA and University of California, Irvine researchers have recently detected the speediest ongoing Western Antarctica glacial retreat rates ever observed.
Mario Tama—Getty Images
Ideas
By Dr. Steven Santos

In March, Donald Trump, then just one of many GOP presidential candidates, told the Washington Post Editorial Board: “I’m not a big believer in man-made climate change.” This was consistent with Trump’s longstanding tendency to dismiss global warming as a “fictional” problem. Since 2011, he’s rattled off a litany of tweets mocking concern for the issue. And if it wasn’t a joke to him, it was a hoax—one created by the Chinese in order to hurt American manufacturing, as Trump tweeted in November 2012.

Climate change is still (somehow) viewed as a controversial issue, but the data suggests that, in reality, a consensus is developing that any climate-change policy should be science-based. A recent Pew poll shows that more than 75 percent of Democrats and 69 percent of moderate Republicans say climate scientists should have a major role in policy decisions related to the climate. According to the same poll, few in either party say climate scientists should have no role in policy decisions. Now, under a Trump administration, Republicans are already heading down a dangerous path of being on the wrong, and possibly dangerous, side of history. Trump has a unique opportunity to take advantage of the emerging consensus supporting climate science, but he appears unlikely to take that step.

President-elect Trump has wasted little time in showing his continued skepticism on climate change. He’s already started off with a bang in hiring to his EPA transition team Myron Ebell, one of the nation’s biggest climate deniers. As someone who prides himself on giving, as he said in a 2007 interview with Vanity Fair, “the informed layman’s perspective,” Ebell is unfit for a job that requires far more serious credentials. In that conversation, Ebell also said, “If science is going to be discussed in the public arena, then shouldn’t people other than scientists be allowed to participate?” While Ebell is correct to say that people other than scientists should participate in the conversation, participation does not entitle them to refute scientific fact. This kind of unqualified encroachment onto the realm of peer-reviewed, data-driven science has created the false perception of a “debate” on climate change. Ebell’s appointment would only embolden this, and Trump would be wise to reconsider it.

Additionally, President-elect Trump has made it very clear that one of his priorities is to dismantle the Paris Agreement. His transition team says advisers are already exploring ways to bypass the four-year waiting period to opt out of it. Though the agreement is imperfect, as it lacks enforcement and at its core is really only an agreement of promises to lower emissions, President Obama was able to achieve recognition from a whopping 200 countries last December to put the world on track to reverse the damaging effects of global warming. The Paris Agreement allows for a foundation upon which the whole world can build, providing climate support and equality in regulating and enforcing emission promises. Trump should leave the agreement in place and focus on the domestic economic issues on which his campaign was based.

Indeed, if President-elect Trump’s goal is to stimulate the American workforce, recognizing climate change means a lot more than it seems. Acknowledging it as fact and a global threat would inevitably lead to higher regulations for American businesses, conceivably making it harder for them to turn a profit, expand and succeed. And yet, everyone agrees that climate change is a problem and all countries have acknowledged it—including China. Countries around the world are prepared to make the existential choice to combat an existential threat.

Ninety percent of climate scientists agree climate change is happening, that it’s destroying our planet and that the issue needs to be addressed immediately. Sea levels are rising at alarming rates. The top seventeen warmest years since 1880 have all happened in the last nineteen years. Glaciers are retreating at alarming speed. Levels of carbon dioxide in our atmosphere are unprecedented—they have never gone above 300 parts per million in the last 600,000 years, and now they are at 400 ppm. Never before has the climate changed so drastically, and there is little evidence that our fragile planet and nature can continue to handle it at current rates. If the planet is dying, are a few extra dollars really worth it? What good will they do you or your descendants when your country becomes a scorched and arid plain?

Conservatives and independents voted for Donald Trump because they believe that a bloated bureaucracy needs a bare-knuckled businessman in charge. During the GOP primary, voters were impressed not with ideologues like Ted Cruz, but with the pragmatism of Trump and his willingness to change the party and the system. Trump’s win shows Republicans can in fact change. The GOP does not have to be the party of climate deniers.

President-elect Trump needs to understand that business and science are not mutually exclusive entities. Despite the perceived alliance of the Democratic party and research funding, science is not a partisan issue. Under Trump’s leadership, America has a chance to enter an era where we can profit and improve while working to solve the effects of climate change. The Trump legacy can and should be keeping American companies competitive while adhering climate change concerns by working with Congress and diplomatically ensuring that other countries—China in particular—also reduce their emissions. But China won’t act unless they think we’ll enforce our agreements.

Let’s make America great again by staying on the right—and safe—side of history and leaving a habitable planet for our kids. 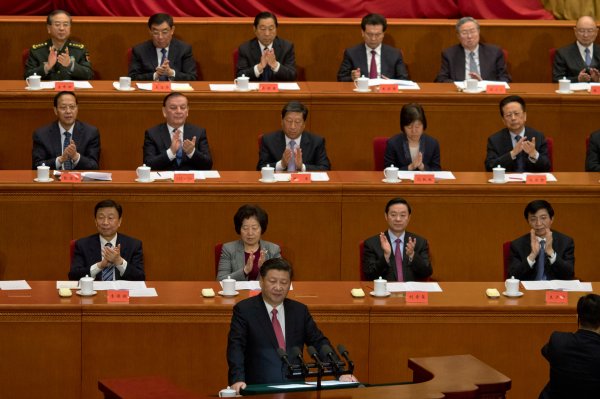 China Reminds Trump of Facts on Climate Change
Next Up: Editor's Pick