Hidden Figures Calculates the Sum of a Story Untold

Katherine Johnson was always running. She ran, several times a day, the half mile from her desk at NASA to the “colored ladies'” restroom on the other side of Virginia’s Langley Research Center, toting binders full of calculations so as not to lose precious time that—this being the height of the space race—the Soviets no doubt were using well. She ran around her home, chasing three daughters whose father had died of a brain tumor. And she ran, on a February afternoon in 1962, from the West Area Computing Unit back to Mission Control when John Glenn refused to take off on his orbit around Earth until Johnson, and only Johnson, double-checked his launch calculations.

When Taraji P. Henson, who plays the sprinting space scientist, read the script for Hidden Figures, Theodore Melfi’s drama about the black female mathematicians, engineers and programmers who helped get Americans into space, her knee-jerk reaction was anger. “I was like, What?” she recalls. “I’m 46, I went to college, and I don’t know this?” Henson’s co-stars—Janelle Monáe, who plays engineer Mary Jackson, and Octavia Spencer, who plays supervisor Dorothy Vaughan—both assumed they were reading a work of fiction.

“It’s cognitive dissonance,” says Spencer. “Black women being recruited to work as mathematicians at NASA’s southern installation defies what we think we know about American history.” Not to mention how Hollywood, historically, has depicted it. Consider movies about geniuses, like Good Will Hunting, A Beautiful Mind, Amadeus, The Theory of Everything, The Social Network. The brainiacs at the chalkboard, the piano and the computer are almost always white, almost always male. Consider films about accomplished black women–like Tina Turner, Josephine Baker, Billie Holiday–all singularly talented, but all entertainers. “We are tired, as consumers, of seeing the same protagonist be the hero,” says Monáe. “We need new heroes, and these women are new heroes for us.”

The phrase colored computer may bring to mind the candy-hued Apple iMac of the late 1990s, but in the early 1960s, it referred to the African-American female mathematicians who performed calculations and plotted data in NASA’s research divisions. Although white women had been employed in these roles since the 1930s, black women were not considered for them until 1943. With men at war and an Executive Order from President Roosevelt prohibiting discrimination in the defense industry, doors began to open for talented black mathematicians.

The story of Johnson, Jackson, Vaughan and their comrades in computation surfaced thanks to Margot Lee Shetterly, whose father worked at NASA with them, and who began work in 2014 on a book about them—now a best seller—also called Hidden Figures. Producer Donna Gigliotti optioned the rights the day after reading the proposal, Melfi backed out of talks to direct a Spider-Man movie, and Pharrell Williams, a space junkie who grew up near the subjects’ homes in Hampton, Va., signed on to produce and work on the score.

Filming in the Georgia heat this past summer, the actors formed a sisterhood inspired by their characters. “You saw these women vent to one another, encourage each other,” says Monáe. “They were dealing with obstacles and had reason to give up. But the relationships they had with one another gave them fuel to go on.”

There is more than a whiff of the classic American up-by-the-bootstraps narrative in each of their stories. Jackson petitions the city of Hampton to take courses at its whites-only high school so she can qualify to train as an engineer. Vaughan teaches herself programming when the arrival of computers threatens to make her job obsolete. But Hidden Figures, which will hit theaters on Christmas Day, downplays individual success in favor of the collective: these women pull one another up. Vaughan, in limbo as an undercompensated “acting” supervisor, laments her stagnation but rejoices in Johnson’s promotion to work on the calculations that will get Glenn, Alan Shepard and the Apollo 11 astronauts into space. “Any upward movement,” she declares, “is movement for us all.”

“NASA: Fast with rocket ships, slow with advancement.” This is how the women of Hidden Figures describe their employer, an agency that relies on inertia to keep its shuttles on their flight paths but maintained a different kind of inertia on the ground–one that kept the colored computers stalled at the intersection of sexism and racism.

The movie’s white characters are not monolithic villains but humans whose attitudes toward their black colleagues fall on a spectrum: there’s the mission-driven color blindness of the boss (Kevin Costner), who doesn’t care who does the calculations as long as they’re correct. There’s Jim Parsons’ head engineer, who can’t decide whether he’s more threatened by Johnson’s gender, her race or the possibility that she might be better at math. And then there’s Kirsten Dunst’s supervisor, perhaps most insidious of all, whose claims of goodwill are not backed by a genuine belief in equality.

When Dunst’s character has a run-in with Vaughan in the bathroom (more than a few critical moments take place there), she tells her, “I have nothing against y’all,” to which Vaughan replies, “I know you probably believe that.” Spencer sees, in their confrontation, a lesson. “A lot of people don’t see that their views could be hurtful. The only way you find out is if you have discourse. When you point a finger at somebody, all they see is the finger in their face.”

Fifty years later, Americans find themselves living with divisions wider than the passage of half a century might suggest. “We still have unfinished business,” says Monáe. “Right now in America, sexism and racism are alive and well. We can’t just hit the cruise control and think we’re going to get there in time to save this next generation.” For Henson, Johnson’s story is an appeal for unity and mutual respect: “You’re in a war, you’re fighting with a soldier, and he saves your life. Do you give a damn what color he is? What bible he reads?”

When we watch movies to learn about the past, we’re also scanning for insight into the future. Johnson, Jackson and Vaughan could be to young girls what Cicely Tyson and Oprah Winfrey were to a young Spencer, who dreamed of acting—to borrow a phrase from transgender activist and actor Laverne Cox—possibility models. Confirmation, in other words, that a path has been walked before and is available to those watching, too. For women of color, those onscreen models were, for so long, limited–to the maid, the jezebel, the sassy friend. The greatest equation Hidden Figures leaves unsolved may be whose story we’ll see next, and what moonshot she’ll be running to achieve.

Partway through the film, the cadre of mathematicians learns that rather than getting laid off as a result of the new IBM, they’ll be reassigned to help process its endless data. As they exit the windowless room in which they’ve toiled for years, headed for the center of NASA’s Virginia universe, trumpets blare as though they’re marching into battle. But it’s kitten heels, not combat boots, tapping cadence on the linoleum floor. And instead of firepower, they’re armed with brainpower. 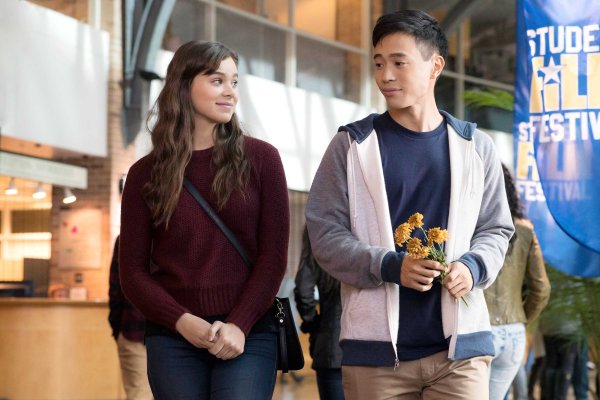 Teen Angst With a New Edge
Next Up: Editor's Pick