Donald Trump’s presidential term is four years. Experts posit North Korea could have a nuclear-armed ballistic missile capable of hitting the U.S. mainland in three to five. Preventing Supreme Leader Kim Jong Un from developing his atomic arsenal ought to be a top priority for the new Commander in Chief. Yet if Trump’s foreign policy is generally murky, his plan for dealing with North Korea, the world’s most unpredictable and clandestine regime, is nonexistent.

Of the more than 7,000 tweets Trump sent since he announced his candidacy, only three have used the term Korea. Trump has called Kim a “bad dude” and a “madman,” while offering to meet the despot “over a hamburger” so he could cut “a good deal.” North Korea has responded positively to those overtures; a June column in DPRK Today, one of the Stalinist state’s mouthpieces, described Trump as a “wise politician” and “a prescient presidential candidate.”

However, Pyongyang reiterated on the day of Trump’s election victory that its nuclearization was a nonnegotiable goal. Given that more nuclear tests loom, the benefits of dialogue, from a U.S. perspective at least, are scant.

“How could Trump’s engagement policy survive the deployment of a functioning nuclear missile?” asks Christopher Green, co-editor of the SinoNK news-analysis forum. “It couldn’t survive that. That’s where rhetoric meet reality.”

Trump also pledged during his campaign to make alliance partners pay for defense assistance, even suggesting that South Korea and Japan should develop their own nuclear weapons — a complete reversal of Washington’s efforts to curb nuclear proliferation ever since the technology was developed. “We are defending South Korea, we’re defending so many countries, we get peanuts,” Trump said in January. (In fact, Seoul paid $886 million toward the upkeep of American troops in 2014 alone.)

Trump’s erratic talk has already upset East Asia’s delicate security dynamic. Calls within South Korea to go nuclear have moved from fringe to mainstream, augmented in no small part by Trump’s bluster. Should Seoul get the bomb, Japan may well follow suit. But this would be fiercely opposed by China and, of course, Kim.

“It would be extremely dangerous and extremely destabilizing,” says Daniel Pinkston, a North Korea specialist at Troy University in Seoul. “North Korea would have an incentive to strike before they acquired that deterrent.”

On occasion, Trump has voiced support for Obama’s — ultimately unsuccessful — policy of pressuring China to impose sanctions on the Kim regime. “China has control — absolute control — over North Korea,” Trump said in a February television interview. “They don’t say it, but they do.”

Trump also said he would use “economics” to strong-arm Beijing into tempering North Korean belligerence. However, while it is true that China is North Korea’s only friend, and responsible for 90% of its trade, to say Beijing holds all the cards “is false,” says John Delury, an East Asia expert at Seoul’s Yonsei University. “I don’t think Donald Trump has studied the China–North Korea relationship.”

A woman walks past a public television screen, showing file footage of a North Korean missile, at a railway station in Seoul on March 4, 2016
AFP/Getty Images

There are also complicating factors beyond Trump’s control. President Park Geun-hye, whom Trump spoke warmly with in one of his first acts as President-elect, has become embroiled in a corruption scandal and may not see out the final year of her term. An estimated 1 million people rallied for her ouster at the weekend amid approval ratings as low as 5%.

Her successor’s North Korea strategy is uncertain; while hawks want the bomb, a resurgent political left advocates a rekindling of the Sunshine Policy of dialogue and engagement. Dithering provides opportunities to the Kim regime, while underlining the need for strong leadership in the White House.

“If there’s a power vacuum in South Korea, and no clarity in Washington, Kim Jong Un can finish the march toward a full nuclear deterrent,” says Delury. “Time is really, really running out before they have a nuclear-weapons program that you cannot even freeze let alone roll back.” 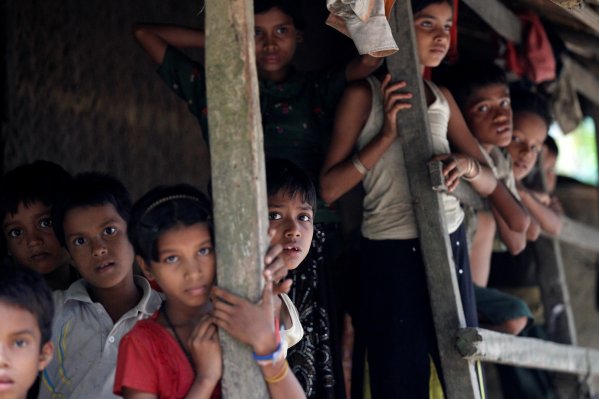 Hundreds of Rohingya Attempt to Flee Burma Violence
Next Up: Editor's Pick