Violence in western Burma has caused hundreds of Rohingya Muslims to attempt to flee across the border into Bangladesh, as the government continues a military crackdown on suspected Islamic militants.

The BBC quoted Bangladeshi officials as saying that some attempting to flee have been shot and killed. Children are reportedly among the groups trying to escape.

Burmese security forces have had parts of Arakan state on lockdown since Oct. 9, when three border security posts came under attack. The government said the attackers were members of an armed jihadist group and launched counterterrorism operations.

At least 130 people have died since the operations began in Maungdaw, in the northern part of Arakan state, which is also known as Rakhine.

Maungdaw is mostly populated by Rohingya Muslims, a persecuted stateless minority numbering about 1.1 million. Many in Burma view them as illegal immigrants from Bangladesh, though they have resided in the country for generations.

Humanitarian aid and access for journalists has been suspended since the start of counterterrorism operations, causing concern that civilians are being affected.

Some aid has reportedly been allowed to reach four villages in the area, whose populations are just a tiny fraction of the 162,000 people who rely on assistance from the World Food Programme.

Reports have meanwhile emerged that security forces have committed abuses such as rape, extrajudicial killings and razing of villages.

Satellite images captured between Oct. 22 and Nov. 10 appear to show hundreds of structures that had been burned to the ground and the U.N. and the U.S. have called for independent investigation into allegations of misconduct.

Burma’s government has denied any wrongdoing, claiming that Muslim “attackers” had caused the damage themselves. This theory is viewed with skepticism by most observers.

Aung San Suu Kyi, Burma’s de facto leader, has made few public remarks about the operations in Arakan. Rights advocates have criticized her silence, though some political analysts say the events there have exposed the limits of her authority.

Tensions have simmered in Arakan state since a wave of communal riots between Buddhists and Muslims in 2012 left more than 100 dead and displaced some 140,000 others. A recently announced police plan to arm and train a civilian force of non-Muslim residents of Arakan is likely to increase sectarian tensions.

The violence has overwhelmingly affected Rohingya. About 100,000 are still confined to squalid displacement where they are denied movement, education and health care. Tens of thousands have fled by boat, many to their deaths in perilous seas. 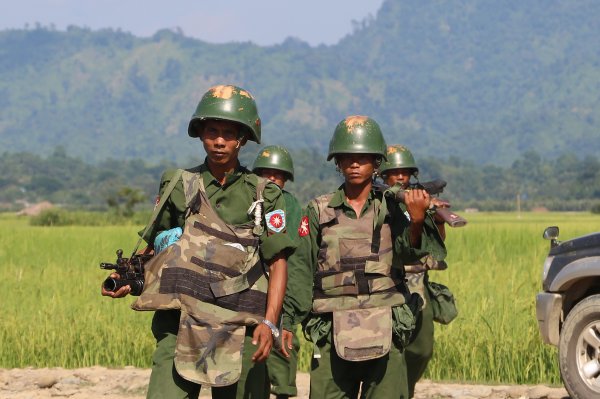