Businesses Must Take the Lead on Climate-Change Action

The sun rises over an oil field over the Monterey Shale formation where gas and oil extraction using hydraulic fracturing, or fracking, is on the verge of a boom on March 24, 2014 near Lost Hills, California.
David McNew—Getty Images
Ideas
By Michael Shank and Maxine Bédat

Michael Shank, PhD, teaches sustainable development at NYU’s Center for Global Affairs and is the communications director at the Carbon Neutral Cities Alliance.

Maxine Bédat is the CEO and co-founder of Zady.com

It likely won’t happen at the federal level, despite the fact that last year our country stated publicly, in front the international community, that in just under 10 years we’d reduce our greenhouse gas emissions by 26% to 28% from what they were in 2005.

That’s probably not going to happen now. The Trump Administration’s Environmental Protection Agency and its Department of Energy will not prioritize this agenda. That’s clear. And it’s unlikely any messaging—from military, financial and medical experts—about the real security, economic or health risks associated with global warming and climate change will change their mind.

Even in a post-Trump era, unless fossil fuel industry contributions to Congress are contained (currently in the hundreds of millions annually), we won’t see Washington move as quickly as it must.

Into this perilous void will step business. In fact, just this week, 365 companies and investors reaffirmed their commitment to addressing climate change and called on the U.S. government to do so as well.

Chief sustainability officers at many Fortune 500 companies are already leading in myriad ways but have been waiting, in and around the Paris process, for the U.S. government to set the policy and regulatory parameters for investment, workforce expansion, research and development and more.

In preparation for the Paris agreement last year, for example, the B Team, stacked with CEOs like Virgin’s Richard Branson, Unilever’s Paul Polman and Tata’s Ratan Tata, called for a global goal of net-zero emissions by 2050, a reality so progressive that even the Paris agreement punts this reality further down the road, landing closer to 2070 and before 2100.

These businesses went further and announced aspirations to make their own companies carbon neutral in just 35 years. And not just the usual suspects above, like the international investment group Virgin and consumer goods giant Unilever, but also a Chinese construction company, an African telecommunications group and a Brazilian cosmetics manufacturer. Others are going beyond neutrality to tackle sustainability, like the fashion company Zady, of which one of us is the CEO, which is pioneering ways for apparel to have a regenerative social and environmental footprint. This is the standard we need to set.

That’s leadership. Companies realize it’s good for business—as the returns on investment are high with renewables, efficiencies and conservation—and stock performance has never been better. Unilever’s 2016 stock performance, for example, is at five-year high. Same with Virgin.

But Unilever and Virgin are not alone. Now, 83 companies are following a similar trend, committing to 100% renewable energy. Swiss Re, the leading reinsurance and insurance provider, is nearly there with 80% of its energy consumption coming from renewable sources. Even Goldman Sachs has a renewable electricity target of 100% by 2020. They’re all cashing in on a $12 trillion investment opportunity, as Bloomberg New Energy Finance has long noted.

This is huge, to use a Trump-ism. And this is where climate leadership lies in a Trump administration.

It’ll happen in the Tesla showrooms of Silicon Valley and among the Elon Musks of America, who understand what consumers want, where the climate is headed and where the economic opportunities lie. Even if we have to wait another four years for strong automobile emissions rules or a much-needed carbon tax to account for the exorbitant yet avoidable health and economic costs to our society. A small-government leader, like Trump, should end these fossil fuel subsidies immediately—valued by the International Monetary Fund at $5.3 trillion globally—in order to conserve taxpayer funds and put money back in the pocketbooks of Americans.

And while business clearly won’t cover all of the required carbon cutting to cool the planet and we’ll need cities and states to lead as well (cities, like ones within the Carbon Neutral Cities Alliance, are committing to equally aggressive goals, as are states and regions as part of the Under 2 MOU) America has always put preference toward business-centric concepts like “innovation” and “ingenuity” to face seemingly insurmountable obstacles. Washington’s policymakers have often treated climate change with this attitude, assuming that we’ll engineer our way out of this problem. Now that narrative has come home to roost. And it may be Americans’ only hope in the next four years. Businesses, lead on. 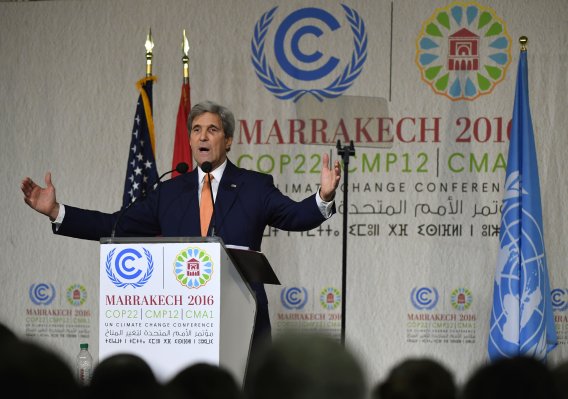 Obama Keeps Pushing on Climate Change Despite Trump
Next Up: Editor's Pick