A new report finds there might be an ocean under Pluto's surface.
Universal History Archive—UIG via Getty Images
By Kerry Close

Two studies published Wednesday by the journal Nature show that the dwarf planet’s surface might have been scarred when a smaller body slammed into it long ago. The subsequent crater—which formed in the shape of a heart—filled with nitrogen ice and potentially liquid water and then developed a thick, icy rind on top. That more massive region would then be tugged on unevenly by the nearby moon Charon, causing Pluto to roll over, as much as 60 degrees, to its current arrangement.

The liquid churning and gravitational perturbation beneath the surface that would result from all this would also explain the cracks on the dwarf planet’s crust. “Imagine you have an egg, and you want to move that bulge to another part of the egg,” one of the researchers, James T. Keane, told the New York Times. “You have to squish it, and that’s going to cause it to break.”

Further supporting the new thinking is the fact that Pluto and Charon are locked in an orbit in which the same side of both worlds always faces the other world. The 2015 flyby by the New Horizons spacecraft showed that the left lobe of Pluto’s celebrated heart formation is almost exactly on the opposite side of Pluto’s Charon-facing hemisphere, which is how the gravitational physics would play out if the area under the heart contained extra weight—in this case an ocean.

Unfortunately, it will be impossible to test the theory until planetary scientists are able to measure Pluto’s gravity—something that can only be done by putting an object in orbit around Pluto. 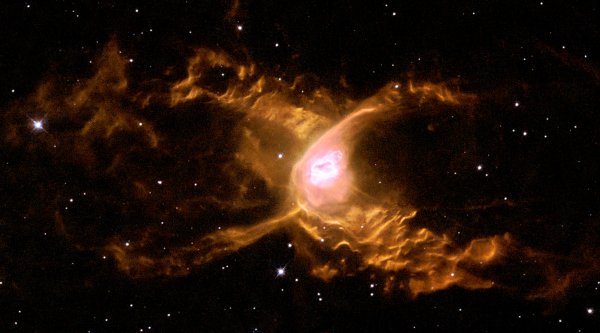 And Now Here's a Spooky Hubble Space Picture Just in Time for Halloween
Next Up: Editor's Pick