Donald Trump may have gone into this first Republican primary debate flustered over fears that moderator Megyn Kelly was going to ask him about his first wife’s claim that he had raped her, Kelly said in a new interview.

The Fox News anchor, who has been promoting her new book Settle for More, told USA Today that she believes the then-presidential candidate entered the stage agitated because he had learned days earlier that Kelly might confront him about Ivana Trump’s accusation. The rape claim was part of a deposition in the 1993 book Lost Tycoon: The Many Lives of Donald J. Trump, though Ivana Trump later retracted it in 2015.

“What I think he was worried about was his divorce from Ivana Trump,” Kelly said. “He was afraid I was going to bring that up.”

Kelly ended up challenging Trump on some of the rhetoric he has used toward women—a now-famous exchange which fired up the real estate mogul and prompted him to unleash a Twitter tirade against her in the following days.

Kelly writes in her memoir that Trump called Fox News executives last year “in an attempt to rein me in” before the debate. “He said he had ‘heard’ that my first question was a very pointed question directed at him,” she says.

Trump and Kelly later met in Trump Tower and appeared together in a television special. “I don’t really blame you, because you’re doing your thing,” he said of Kelly’s debate questions. “But from my standpoint, I don’t have to like it.” 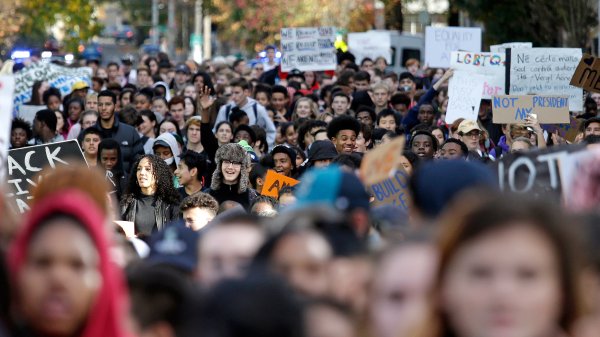 Students Across the U.S. Stage Walkouts to Protest Donald Trump
Next Up: Editor's Pick