Oxford Dictionaries kicked off “word of the year” season by anointing their pick on Tuesday: post-truth.

The word, selected by Oxford’s editors, does not need to be coined in the past year but it does have to capture the English-speaking public’s mood and preoccupations. And that makes this one an apt choice for countries like America and Britain, where people lived through divisive, populist upheavals that often seemed to prize passion above all else—including facts.

The word dates back to at least 1992, but Oxford saw its usage explode by 2,000% this year, based on their ongoing monitoring of how people are using English. Oxford notes that the phrase post-truth politics has enjoyed particular popularity of late. “It’s not surprising that our choice reflects a year dominated by highly-charged political and social discourse,” said Casper Grathwohl, president of Oxford Dictionaries. “Fueled by the rise of social media as a news source and a growing distrust of facts offered up by the establishment, post-truth as a concept has been finding its linguistic footing for some time.” And, he suggests, it may become a defining word of our time.

The selection is a rather somber follow-up to last year’s choice — 😂 — an emoji shedding tears of joy that reflected people’s playfulness in embracing changing language more than their pains in weathering changing politics. Although the short list contains some light-hearted concepts, it too reflects a big truth about 2016: it has been a hard year full of soul-searching and separation, marked by transition and lines between self and other.

adulting noun, informal: The practice of behaving in a way characteristic of a responsible adult, especially the accomplishment of mundane but necessary tasks. (See: more on why millennials have embraced the term.)

alt-right noun: An ideological grouping associated with extreme conservative or reactionary viewpoints, characterized by a rejection of mainstream politics and by the use of online media to disseminate deliberately controversial content. (See: TIME’s cover on Internet trolling.)

Brexiteer noun, informal: A person who is in favor of the United Kingdom withdrawing from the European Union. (See: how news outlets around the world covered that story.)

chatbot noun: A computer program designed to simulate conversation with human users, especially over the Internet. (See: an explanation on why these are taking over all the things.)

coulrophobia noun: Extreme or irrational fear of clowns (See: what an odd October diversion the “clown craze” was.)

glass cliff noun: Used with reference to a situation in which a woman or member of a minority group ascends to a leadership position in challenging circumstances where the risk of failure is high. (See: the plights of women who rise in politics.)

hygge noun: A quality of cosiness and comfortable conviviality that engenders a feeling of contentment or well-being, regarded as a defining characteristic of Danish culture. (See: how popular the idea has become in British culture.)

Latinx noun: A person of Latin American origin or descent, used as a gender-neutral or non-binary alternative to Latino or Latina. (See: the rise of non-binary identities.)

woke adjective, US informal: [originally in African-American usage] Alert to injustice in society, especially racism. (See: a must-read on what you should consider before using the term.) 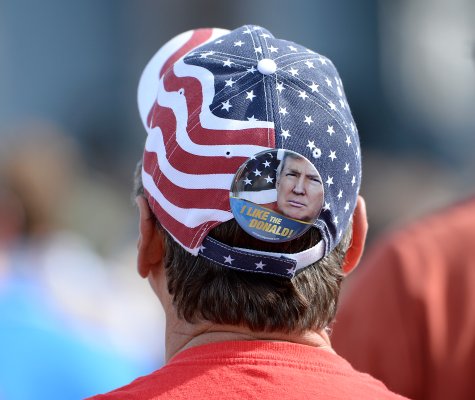 What the Words Used to Describe Clinton and Trump Supporters Really Mean
Next Up: Editor's Pick