How the Fantastic Beasts Films Fit Into the Harry Potter Timeline

The Fantastic Beasts series begins in 1920s New York City, but the events of the Harry Potter prequel films—including the recent second installment, Fantastic Beasts: The Crimes of Grindelwald—are significant for J.K. Rowling’s entire Potterverse, even impacting the modern-day British wizarding world introduced in Harry Potter and the Sorcerer’s Stone.

The first movie, Fantastic Beasts and Where to Find Them, follows magizoologist Newt Scamander (Eddie Redmayne)—the author of a famous Hogwarts textbook—who arrives in New York City with an enchanted briefcase full of magical creatures and the desire to complete a global research expedition. However, when several of his beasts accidentally escape, he finds himself embroiled in the political tensions surrounding the American magical community.

MORE: All the Ways Fantastic Beasts: The Crimes of Grindelwald Connects to Harry Potter

Much of the trouble stems from discord over how witches and wizards should interact with their non-magical counterparts, a divide that has been further strained by the actions of Gellert Grindelwald (Johnny Depp), a dark wizard who has a complicated history with Albus Dumbledore (Jude Law).

When The Crimes of Grindelwald begins, a few months after the events of Fantastic Beasts and Where to Find Them, Newt is back in the U.K. and banned from international travel by the British Ministry of Magic. But when Dumbledore recruits him to track down Credence Barebone (Ezra Miller) in Paris before the escaped Grindelwald can, he resolves to hop an illegal Portkey to France and find the powerful, yet troubled, Obscurial.

Rowling has said that the franchise will take place over a period of 19 years, meaning the events of the series will conclude in 1945. As this is the year Dumbledore famously defeated Grindelwald in a duel, it seems to indicate that the relationship between the pair will play a large role in the coming films.

Take a look at the timeline to see how the events of Fantastic Beasts connect to Harry Potter.

Note: Although Albus Dumbledore is usually referred to by his last name, for the sake of clarity, we’re calling him Albus in the timeline.

1881: Albus Dumbledore is born to Percival and Kendra Dumbledore in the village of Mould-on-the-Wold.

1891: Ariana is attacked by three Muggle boys. Percival seeks revenge for his daughter’s assault and is imprisoned in Azkaban for it.

1927: Newt travels to Paris to find Credence on Albus’ orders. Credence flees with Grindelwald to Nurmengard where he learns that he is Albus’ long-lost brother Aurelius. Newt publishes Fantastic Beasts and Where to Find Them.

1945: Voldemort leaves Hogwarts and disappears. Albus defeats Grindelwald in a duel, winning control of the Elder Wand and ending the Global Wizarding War. Grindelwald is sentenced to life in Nurmengard prison.

1956: Albus is appointed headmaster of Hogwarts.

October 1981: Voldemort’s soul is ripped from his body when he attempts to kill baby Harry, ending the First Wizarding War.

March 1998: Voldemort kills Grindelwald in Nurmengard in an attempt to gain control of the Elder Wand.

May 1998: Harry defeats Voldemort during the Battle of Hogwarts, ending the Second Wizarding War. 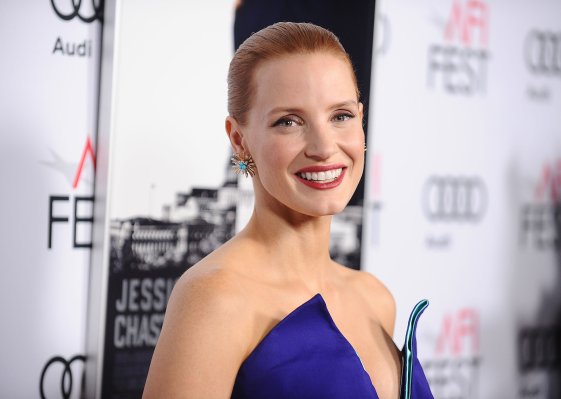 Jessica Chastain Risks Her Life to Save Others in the Trailer for The Zookeeper's Wife
Next Up: Editor's Pick