A West Virginia official who called First Lady Michelle Obama an “ape in heels” has been placed on leave after the racist remark prompted intense backlash and calls for her termination.

Pamela Ramsey Taylor, the director of Clay County Development Corp., came under fire after she wrote in a since-deleted Facebook post: “It will be refreshing to have a classy, beautiful, dignified First Lady in the White House. I’m tired of seeing a (sic) Ape in heels,” according to the Associated Press.

Clay Mayor Beverly Whaling chimed in, writing in a comment: “Just made my day Pam.”

Both landed in hot water for the comments, which came after Republican Donald Trump was elected president. More than 103,000 people have signed an online petition calling for both Taylor and Whaling to be fired. The petition says the post was “hateful” and “racially motivated.” “Every grant and piece of paper Mrs. Taylor and Ms. Whaling have to fill out and sign promises equal opportunities and a racism free workplace,” it reads.

Taylor, who runs a nonprofit that provides services to elderly and low-income residents in the county, told WCHS-TV on Monday night that she was put on leave. She apologized on Facebook but subsequently deleted her page, the station reports.

Whaling apologized for her role in the firestorm and said in a statement to WCHS that she was not racist. “I would like to apologize for any unintentional harm caused by my comment,” Whaling said. “My comment was not intended to be racist at all. I was referring to my day being made for the change in the White House! I am truly sorry for any hard feeling this may have caused! Those who know me, know that I am not in any way racist! Again, I would like to apologize for this getting out of hand!” 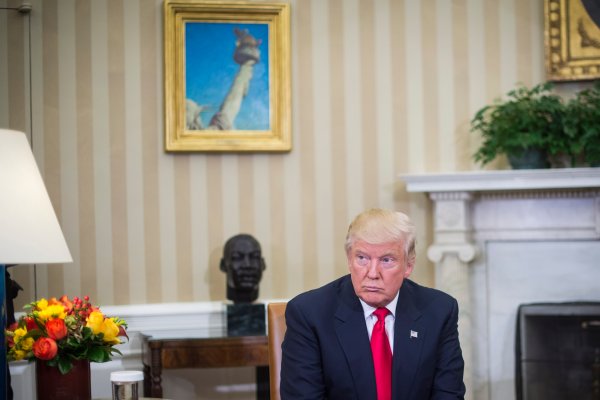 Trump: I Could Have Won the Popular Vote
Next Up: Editor's Pick