7 Harry Potter Callbacks to Look Out For in Fantastic Beasts

By Kate Samuelson and Megan McCluskey

Fantastic Beasts and Where to Find Them, J. K. Rowling’s latest foray into the wonderful world of witches and wizards, hit theaters Friday. The movie stars Eddie Redmayne as magizoologist Newt Scamander, and serves as a prequel to the original Harry Potter series.

Set in 1920s New York City, the events of Fantastic Beasts take place decades before the birth and death of Harry’s parents, Voldermort’s rise to power and Albus Dumbledore’s appointment as Hogwarts’ headmaster. But despite being set nearly 70 years apart — and on opposite sides of the Atlantic — Rowling has, ingenious as ever, managed to link the worlds in a number of imaginative ways.

Here are seven callbacks Potter fans should keep an eye out for in Fantastic Beasts:

The first few seconds of the movie are spine-tingling for any Potter lover, thanks to the inclusion of the first few bars of John William’s iconic “Hedwig’s Theme,” which played in every previous Potter film. However, instead of continuing into the composition that is familiar to all Potter fans, the Fantastic Beasts theme offers a chilling variation on the original.

Muggles may be called “No-Majs” in Fantastic Beasts, but much of Harry Potter‘s wizarding lingo remains unchanged — or un-Americanized. Spells are a good example of this; a quick (and effective) “Alohomora” is uttered early on in the story.

When Newt first arrives in America and flips the “Muggle Worthy” switch on his enchanted case, one of the items the customs official is able to see inside is a yellow and gray striped Hufflepuff scarf. Later in the film, Newt argues with Tina and Queenie over whether Hogwarts or Ilvermorny — the American equivalent — is a better wizarding school.

Albus Dumbledore, who would have been a Transfiguration professor in his 40s at the time Fantastic Beasts takes place, is name-checked toward the middle of the movie during a conversation between Scamander and Percival Graves (Colin Farrell), head of MACUSA’s Department of Magical Law Enforcement. During the discussion, it’s revealed that Dumbledore argued against Scamander’s expulsion from Hogwarts, an important reference that could prove significant in subsequent films.

Like Dumbledore, Gellert Grindelwald, the man considered to be one of the most dangerous dark wizards of all time, is a notable presence in Fantastic Beasts. Newspapers hint that he is a wanted man, and one character references “one of Grindelwald’s fanatics.” The dark wizard — whom Rowling revealed during a tour in 2007 that Dumbledore had romantic (but unrequited) feelings for — will likely play a bigger role in the sequel to Fantastic Beasts.

The enchanted basin that allows its owner to experience — and store — memories before they are forgotten is first introduced in Dumbledore’s office during The Goblet of Fire and is used by Rowling throughout the Potter series as a flashback narrative device. In Fantastic Beasts, she employs the magical concept in a much more sinister manner. When two characters are sentenced to die by a member of MACUSA, we learn that the American wizarding community’s death penalty involves luring the condemned into a giant Pensieve by broadcasting their happy memories on its surface.

Thanks to the sadistic Bellatrix — Voldemort’s most devout follower — the name Lestrange has become synonymous with evil in the Potterverse. However, in Fantastic Beasts, it’s revealed that Newt’s best friend during his time at Hogwarts was a girl named Leta Lestrange — played by Zoë Kravitz. It’s currently unclear how Leta will factor into the story going forward, but the manner in which Scamander acts when asked about their relationship suggests they had a falling out — a possible hint that she turned to dark magic.

High up on the list of memorable Harry Potter details is the way in which wizards reach Platform 9 3/4 to get on the Hogwarts Express — by running through a brick wall at King’s Cross Station. Not only is this unusual boarding method alluded to in Fantastic Beasts, but much of the movie’s final battle scene takes place in New York’s City Hall Station; clearly Rowling believes trains equal drama.

Write to Kate Samuelson at kate.samuelson@time.com and Megan McCluskey at megan.mccluskey@time.com. 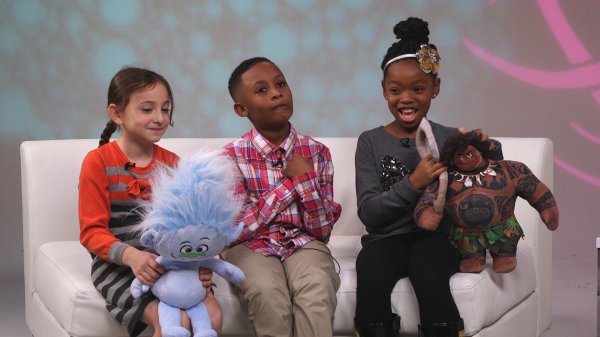