What Trump's ‘America First’ Policy Could Mean for the World

U.S. President-elect Donald Trump speaks to the press following a meeting with Senate Majority Leader Mitch McConnell at the Capitol in Washington, D.C., on Nov. 10, 2016.
Nicholas Kamm—AFP/Getty Images
Ideas
By Howard Stoffer
Dr. Howard Stoffer is Associate Professor of National Security at the University of New Haven. Previously, he served in the Foreign Service of the United States and as the Deputy Executive Director of the Counter-Terrorism Committee Executive Directorate of the U.N. Security Council

If President Obama’s foreign policy was characterized by “don’t do stupid stuff” and a retracted U.S. presence in the world, then Donald J. Trump’s will most certainly be characterized by fear and confusion as the world grapples with what “America First” really means. The real estate mogul turned President-elect has been known to change his view on everything from the Iraq War to Vladimir Putin. But if we are to forecast the consequences of Trump’s foreign policy based on his campaign declarations and promises, then the coming months could look something like this.

First, “The Wall” would be constructed and our immigration policy would change drastically, affecting relations with Mexico, the Arab and Muslim world, and others. We could see the construction of a 1,900-mile East German-style wall along the Mexican border, demanding a new budget funded by Mexico (which politely already refused), the federal government or states.

At the same time, the deportation of 11 million or more undocumented aliens (3% of the U.S. population) could begin as soon as Congress approves a special “deportation force” operating outside the existing immigration courts. Trump said Sunday he plans to keep his promise on deportation.

Exclusions and restrictions on all Muslims seeking entry into the U.S. could follow, including registration of Muslims within the U.S., resulting in contentious court challenges.

Following the repudiation of defense treaties, the U.S. would pull back or reduce troops stationed in places including Japan, South Korea, the Philippines and Germany, which serve as forward deployments in times of crisis or trip-wires in times of looming war, because Trump could argue that these allies are not paying their fair share. Intense military efforts would be used against ISIS, while the American use of torture, including waterboarding and “a hell of a lot worse” against prisoners, enemy combatants and perhaps their families would increase. Finally, demands on NATO allies to meet their military spending obligations would increase along with substantial threats to those allies.

In return, there would be many consequences to our blind bulldozing of our agreements, commitment or respect for international law under an “America First” policy.

Backing out of the Paris Climate Accord would let global warming run wild without any comprehensive restraints. The shredding of NAFTA and other trade accords would result in the disruption of global supply chains that generate billions of dollars in trade between the U.S. and many other countries, especially Mexico. Potential foreign investment in the U.S. from around the world could be diverted. The imposition of heavy tariffs on imported goods, especially from China, would violate WTO rules and could spark a global trade war.

The abandonment of allies and friends would provoke the development and proliferation of nuclear weapons in place of the American nuclear umbrella in Asia, the Middle East and elsewhere. Critical nuclear agreements such as the Non-Proliferation Treaty or plutonium agreements would be degraded or abrogated, encouraging our foes to also pursue increased nuclear development strategies. Scrapping the Iran nuclear pact would give a green light to Iran to go all-in with a nuclear capability. Israel would be under pressure to act alone to deal with a future Iranian nuclear bomb.

Current allies would increasingly turn to the next superpower for protection, probably Russia or China. Robust American military action against ISIS would result in many civilian casualties and will engineer new support for terrorism and violent extremism. NATO would not be able to offer assurances to the Baltic States and countries in Central Europe, as America’s commitment to them under Article V of the NATO Treaty would become negotiable. In turn, this would give the green light to Putin to keep Crimea and continue threatening parts of eastern Ukraine without any expectation of an American, much less continuation of Western, sanctions.

These are just a few of the immediate effects of Donald Trump’s foreign policy as he has articulated in his campaign. Of course, nobody is completely sure what Trump will actually do. His most recent claim in his acceptance speech was that “we will get along with all other nations willing to get along with us” and that “we’ll have great relationships.” Ultimately, the confusion and brashness of his approach could lead to self-destructive results for American interests and stability. Although some may be quick to label these situations as doomsday scenarios, they are the likely outcomes until Trump offers the world more clarity on his foreign policy approach. Unfortunately, it’s likely that we will no longer be theorizing doomsday scenarios; we will be living them. 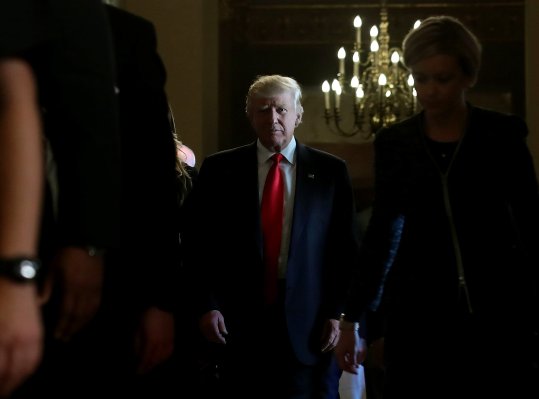 President Trump and Brexit Are Only the Start
Next Up: Editor's Pick