How Female Runners Are Coping With Street Harassment

“It looks like she’s running with a stick up her butt,” a man told his friends as I ran past them in a neighborhood near my college campus. Another man retorted, “That’s because I’m going into her from behind.”

As laughter filled my ears, I made a quick assessment: there were five of them and one of me. No one else was on the street. I quickly glared in their direction, then sprinted away, unsure if their words would escalate into action. My face felt hot with humiliation and anger as I ran back to my dorm. Later, I could barely concentrate on my schoolwork. I ranted to my long-distance boyfriend over IM. He was bewildered by my experience and by my fury. “It feels like verbal rape,” I angrily typed.

While it was one of my more upsetting experiences, such experiences are all too common for women who run. A recent survey by the magazine Runner’s World found that among the 2,533 female respondents, 43% experienced harassment while running at least sometimes. In contrast, the response among the 2,137 male respondents was 4%.

The results surprised many men, including Runner’s World Editor-in-Chief David Willey. He said he was “stunned, outraged, and embarrassed” to learn of women’s experiences. Women, of course, aren’t surprised. Many of them have shared their stories with the hashtag #HarassedMidRun.

The survey came about after the deaths of three women runners in three separate incidents this summer. Meghan Kita, the Runner’s World editor who oversaw the survey, told me that, “Harassment feeds into women’s pre-existing safety concerns. Every woman has been raised to think that something bad can happen just because you’re a woman. You’re already on high alert for that and street harassment just reinforces your vulnerability.”

In my case, the harassment began when I trained for my first my first full marathon at age 14. Nineteen years later, it still happens. Recently, a man in a car shouted the c-word at me from across the street.

The most scared I’ve been was when a man chased me through a park 11 years ago. I outran him, my fear felt so crushing I don’t recall breathing. Most often though, men holler, honk or whistle at me from their vehicles. That may sound minor, but there were periods of time when men needlessly interrupted me in this way up to ten times per run.

“I bet my male teammates don’t have to deal with this,” I’d grumble to myself.

Even elite female runners aren’t immune. Kara Goucher has been running for a quarter-century and has represented the U.S. twice at the Olympics. She said, “Cat calls and whistles are common place. There have been times in my life where I actually felt threatened.”

Her most menacing experience occurred during a training run when men in a truck kept following and harassing her no matter where she went. Once she finally escaped for good, she ended her run early and had nightmares that night. Generally, she avoids running after dark and sticks to populated trails.

“I try to not let it control my life, but it does affect choices I make in training,” Goucher said.

She’s not alone. Sixty-three percent of female Runner’s World respondents said they choose their running routes based on whether or not they may encounter someone who will harm them.

Why does this matter? While running is out of reach for some people due to physical differences or obstacles like a lack of places to run, many people do run for fun, for health and to push their bodies to the limit. Running USA reports that in 2015, more than 17 million people ran in a race. Further, health experts suggest running to reduce the risk of certain diseases. Shouldn’t everyone have the same chance to safely reap those benefits?

Of course, street harassment isn’t limited to runners. A 2014 nationally representative survey from the firm I started found that 65% of all American women have experienced street harassment. Other studies prove it is a problem internationally, too,

Too often the advice given to combat street harassment — for runners and non-runners alike — is to change the way we live our lives. Don’t go out alone or after dark for example. This input is impractical, limits our freedom and doesn’t always work.

Instead, we need men — the primary perpetrators of this type of harassment — to be aware of and acknowledge our experiences, and inquire how we feel. Above all, we need men to not harass us, or to and call out their buddies who do.

If you experience harassment and are safe to respond, it may feel empowering to do so. When there is time, I say, “Don’t harass me.” I also ask women I witness facing harassment if they are OK.

After facing harassment, it may help you through the experience if you talk about it with a friend, family member or colleague. For emotional support and advice, you can even call the new, toll-free line, Street Harassment Hotline: 855-897-5910.

When it comes to running, Goucher said it best, “Running is one of the greatest joys in my life. I’m not going to let anyone take that from me.”

I agree. Every time we lace up, we should be able to claim the right to run, safely. 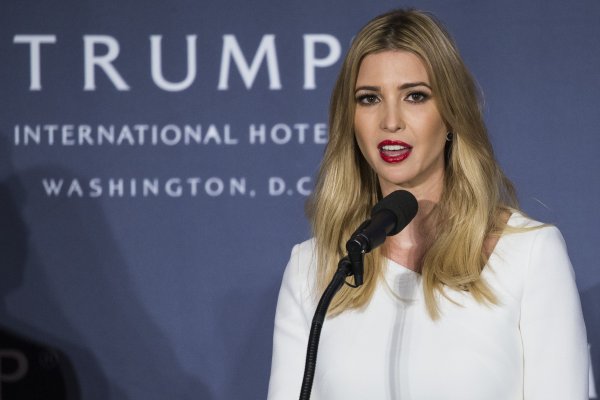 Ivanka Trump Vows to Fight for Women's Issues as First Daughter
Next Up: Editor's Pick