Winter Is Coming for Tens of Thousands of Refugees in Greece

Syrian refugee Hayat bathes baby Rahaf, born one week earlier, next to a heater, at the Oreokastro camp in Thessaloniki, Greece, on Nov. 8, 2016. Rahaf was born to Noor Alhouda Talaa, 22, and Yusuf Arsan, 27.
Lynsey Addario—Getty Images Reportage for TIME
By Aryn Baker / Thessaloniki

Camp residents heard the screaming before the acrid scent of burning plastic and polyester wafted through the abandoned factory. Once a tobacco processing facility, the vast warehouse had been turned into a refugee camp near the northern Greek city of Thessaloniki, housing nearly 1,400 refugees from Syria in regimented rows of canvas tents. Early on the morning of Oct. 30, one of those tents caught fire, sending the camp into panic as neighbors attempted to put out the flames and rescue the inhabitants. Graphic videos posted to the camp’s Facebook page show friends and family desperately trying to pull a screaming 8-year-old boy out of the melted remains of a polyester sleeping bag. He is now on life support at a local hospital with burns over most of his body.

Greek authorities are still trying to determine the exact cause of the fire in Oreokastro camp, but residents say they already know the culprit: northern Greece’s bone-chilling winter nights. The boy’s mother had left a hotplate on in a desperate attempt to heat her tent and keep the family warm. Most likely the boy brushed up against the electric cooking appliance with his sleeping bag, which subsequently caught fire. Camp resident Hayat Abdullah, from Deir ez-Zor, Syria, warns that these kinds of fires are likely to happen again, as refugees battle the cold. “Of course it is dangerous to leave the hotplate on,” she says “But a lot of people use them to heat the tents. It’s all they have.”

As President Obama embarks on his final European tour, he will be making a stop in Greece to discuss, in part, that country’s struggle to cope with the more than 50,000 migrants who, after fleeing the battlefields of the Middle East, are now waiting for relocation elsewhere on the continent. A recent cold snap brought temperatures across Greece to near freezing the day before his arrival, a stark reminder that while some 15,000 of the most vulnerable refugees have been moved to pre-fab housing containers hotels and apartments with heat, 38,000 are still living in camps that are ill prepared for the cold and snow of the coming winter. “Conditions are appalling,” says Roland Schönbauer, the Athens-based Public Information Officer for the United Nations High Commissioner For Refugees (UNHCR).

UNHCR supplied the besieged residents with blankets, plastic sheeting and replacement tents; overall it has distributed more than 200,000 winter items—including sleeping bags, hats, gloves and thermal leggings—to refugees living in similar conditions across the country. The so-called “winterization” kits, which were funded in part by the European Commission with donations from fashion brands Uniqlo and Falke, were appreciated by camp residents, who donned the leggings and socks immediately. Still, says Schönbauer, the kits aren’t nearly enough. “We — the community of humanitarian actors, NGOs and UNHCR — we started late, and we really need to speed up to be ahead of the first snow.”

Syrian refugee Tayma Abzali, 24, straightens up her tent as her baby, Helen, born on Sept. 13, sleeps in a warm onesie at a camp in Thessaloniki, Greece, on Nov. 10, 2016. Tayma, like other refugee mothers living in tents, is concerned about the onset of winter and cold temperatures in the tents—particularly those with new babies.
Lynsey Addario—Getty Images Reportage for TIME

Mohammad al Ali, a former pharmacist from Deir ez-Zor who is now Oreokastro’s unofficial refugee representative, says that at this point, warm clothes and blankets only go so far. “We have enough blankets, but blankets are not enough,” he says. Warm clothes don’t help much when you’re forced to bathe in cold-water-only outdoor showers, as the refugees of Oreokastro are. “It’s not like you can wear your sleeping bag into the bathroom,” he jokes.

Some of the NGOs working in Oreokastro and other camps have discussed installing massive generators to run water boilers and heaters, but the logistics are so expensive, and so complicated — securing the fuel to run the generators has been one concern — that little has been done. “We started hearing about water heaters in August, but they still haven’t done anything yet and it’s November.” says al Ali. “We need a better solution. We can’t live in tents forever.”

Schönbauer agrees, but says UNHCR’s hands are tied. The agency’s original winterization plan was to move all of the refugees and asylum seekers into hotels and apartment blocks while they went through the resettlement system, but the process has proven to be much more time consuming than anyone thought, creating an immense backlog and a shortage of temporary housing options.

Back in the fall of 2015, when an average of 7,000 migrants were pouring into the country every day, the European Union pledged to resettle 66,400 asylum seekers as a way to mitigate Greece’s refugee crisis. But most European countries are dragging their feet, and some, like Poland, have refused to resettle refugees altogether. So far only 5,400 have left the country, according to Schönbauer, creating a massive bottleneck in Greece—already one of Europe’s poorest countries. “If the relocation countries don’t speed up in keeping their word the process will take years.” At current rates, according to a recent report from Amnesty International, it could take 16 years to resettle Greece’s refugees.

“The original idea was that the temporary flats would have revolving doors, needed for just a few weeks per family as the relocation process placed them elsewhere in Europe,” says Schönbauer. “But the revolving door is moving much slower than we had hoped and had been promised, so now we don’t have enough housing to go around.” Meanwhile he says, the weather is only going to get worse, placing more families in miserable, and dangerous, conditions. Despite EU pledges, they may be stuck in Greece for a while. There has been a rise in anti-immigrant sentiment across Europe as populist parties gain power largely based on fears of the Middle East’s largely Muslim refugees, a trend echoed in the United States’ recent election of Donald Trump to the presidency, a man who campaigned on an anti-Muslim and anti-migrant platform. Nonetheless, says Schönbauer, “Europe must face the reality that the majority of these migrants and refugees will be staying. The sooner we embrace a more realistic approach to refugee integration the sooner we will get to the point where we can deal with the fact that people don’t have a warm place to live or even hot water for bathing.” And the less likely desperate refugees will resort to dangerous methods to stay warm.

Correction: The original version of this story incorrectly described the refugees and their current living conditions. They are being relocated to Europe, and the 38,000 who have not yet been housed are living in refugee camps in various forms of shelter. 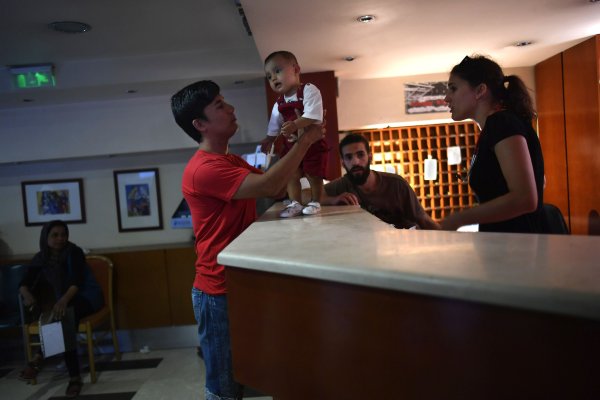 Anarchists Find Space for Refugees in Abandoned Hotels
Next Up: Editor's Pick