This New Zealand Radio Presenter Stayed on Air During an Earthquake

A radio show host in New Zealand has been praised for staying calm and finishing her broadcast as a 7.5-magnitude earthquake hit the country on Sunday night.

Presenter Vicki McKay announced the earthquake just after midnight local time from Radio New Zealand‘s broadcasting headquarters in Wellington, which lies on the southern tip of New Zealand’s North Island. In a video clip posted on the broadcaster’s Facebook page, McKay finished her cricket report before saying “Yes Wellington, we are undergoing a fairly dense earthquake at the moment so please just get to somewhere where you are safely under some protection.”

Despite presenting her show during the first of two powerful tremors that have damaged roads and buildings across New Zealand, McKay managed to retained her composure. She concluded the broadcast by saying “Hopefully it will calm and ease off, it’s definitely the biggest earthquake we’ve had in Wellington for some time,” before wishing listeners well and transitioning into a song.

McKay’s broadcast has garnered praise from Facebook users commenting on the video, as well as Twitter commentators applauding her calm tone amidst the natural disaster. 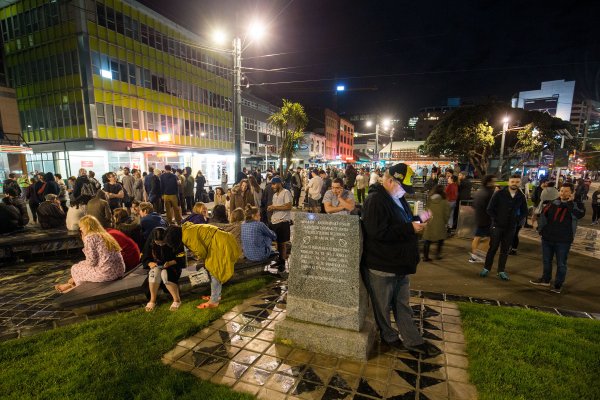