Moldova's presidential candidate Igor Dodon gestures during a press conference after the end of voting in Chisinau, Moldova, on Nov. 13, 2016
Daniel Mihailescu—AFP/Getty Images
By Kevin Lui

Russia’s geopolitical influence is set to be further strengthened, with two Eastern European countries expected to elect as their leaders candidates with links to Moscow and the Russian President, Vladimir Putin.

Voters in the former Soviet bloc nations of Bulgaria and Moldova went to the polls Sunday in their respective runoff presidential elections. The New York Times reports that in both instances, an openly pro-Russia candidate would all but certainly assume the presidency.

Such an outcome could plunge the European Union in further crisis, according to Reuters, as Moldova, currently yet to become an E.U. member, could possibly end its ongoing integration efforts with the regional bloc. The Times reports that pro-Russian socialist candidate Igor Dodon has plans for a referendum on whether the country should withdraw from a 2014 political-and-trade agreement with the E.U., and instead join a Russia-led Eurasian Customs Union.

Read Also: Broken Dreams: The Aftermath of 25 Years of Democracy in Bulgaria

The country has found itself in turmoil since revelation of massive corruption came in 2014, when over $1 billion — roughly one-eighth of the whole country’s GDP — was discovered to have vanished. Locals believe that the country’s elite, largely sympathetic to the E.U., was somehow involved this graft, according to Reuters.

In Bulgaria, the apparent President-elect, Rumen Radev, is a former air-force commander without political experience. Reuters reports that his pro-Moscow, anti-immigrant campaign platform has found resonance in a country coming to grips with being the poorest member state of the E.U. He has campaigned on a promise to not let Bulgaria, which borders Turkey, become “Europe’s migrant ghetto,” according to the Times.

Radev also praised U.S. President-elect Donald Trump’s apparent willingness to soften strained U.S.-Russia relations, according to the Times, saying that it “brings big hope for finding a peaceful resolution to the conflicts in Syria and Ukraine and avoiding further confrontation and escalation.“ 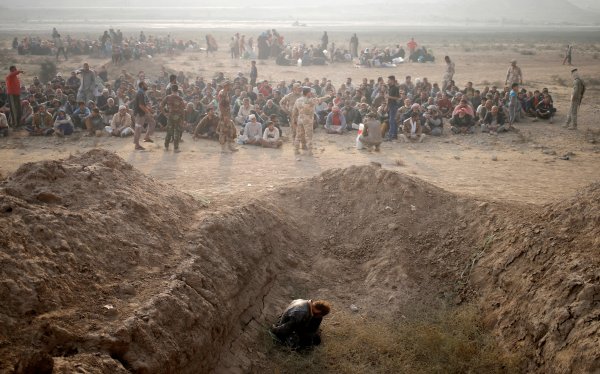 ISIS Defeat in Mosul May Send Jihadists, Migrants to Europe
Next Up: Editor's Pick