Burmese government security forces say they opened fire from helicopters in the country’s troubled northwest as counter-terrorism operations continue in Maungdaw, an area mostly populated by Rohingya Muslims. The government of Burma, officially called Myanmar, says the air strikes were a response to an alleged ambush by armed Islamic militants.

Government forces then fought back, forcing the alleged assailants to retreat into Gwason village, the paper said. When the troops attempted to approach the village in search of assailants, they reportedly came under attack by some 500 people armed with “small guns, knives and spears.”

The government said it then opened fire with two Air Force helicopters, forcing the alleged attackers to retreat into Gwason village where the Burma Army has “stepped up its clearance operations and are actively searching for the attackers.” The BBC reports that the army has since said soldiers shot and killed at least 25 suspected assailants in the area on Sunday.

Independent journalists are not allowed to enter the operation zone, making it impossible to verify the scale of the violence.

This weekend’s operation marks the latest and potentially most serious escalation of violence in Arakan State, also known as Rakhine, since three border guard posts reportedly came under attack on Oct. 9.

The government said that attack was carried out by Islamic militants and immediately put the area on military lockdown, halting all access for humanitarian workers and journalists.

Credible reports have emerged from the area that government troops have committed human rights violations including rape, extra-judicial killings and the razing of villages.

Satellite images released by Human Rights Watch appear to show extensive fire damage in several villages, and the group claims some 430 buildings were burnt. The images were captured between Oct. 22 and Nov. 10.

The government claims that Muslim militants have set their own villages ablaze in an attempt to discredit the Burma Army, known locally as the Tatmadaw. This theory is viewed with skepticism by most observers.

The U.N. and the U.S. have called for an independent investigation into allegations of abuse.

Rohingya Muslims, a stateless minority numbering about 1.1 million, are the majority in Maungdaw, which borders Bangladesh. They are viewed as illegal immigrants and widely persecuted.

Elsewhere in the state, as in much of Burma, Buddhists are the majority. Communal violence between Buddhists and Muslims in the state left more than 100 dead and displaced some 140,000 people in 2012. Most of those affected were Rohingya, and many of the displaced are still confined to squalid camps where they are largely denied movement, education and health services. Tens of thousands have fled by boat in recent years.

The Oct. 9 border guard attack marked the most serious escalation of tensions since the 2012 riots, and the ensuing counter-terrorism operations have prompted concern that Muslim civilians could suffer in the crossfire. State police have announced a plan to arm and train a civilian security force made of non-Muslim recruits.

At least 58 people have died during the counter-terrorism operations, though human rights researchers claim the casualties could be higher.

The renewed conflict in Arakan is the toughest test yet for Burma’s new government, which is led by Nobel peace laureate Aung San Suu Kyi following her landslide win in elections last year. Her party flushed out a military-backed government and ushered in a wave of international optimism about the former pariah state, though the army retains significant political and economic power. 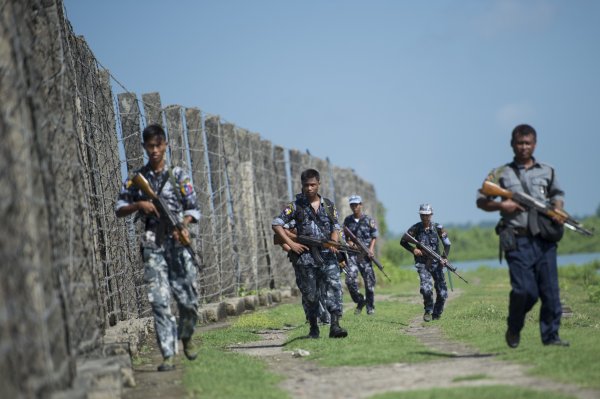 Police in Burma to Arm, Train Civilians to Fight 'Militants'
Next Up: Editor's Pick