How to Report Under Authoritarianism

When I first started reporting in Egypt in 2012, in the wake of the Arab Spring, the story there was about elections and protests. By the time I left earlier this year, a lot of the story was about prisons.

After Egypt’s military overthrew the country’s elected president Mohamed Morsi in the summer of 2013, journalists started spending a lot more time in jails and courtrooms. Through 2014 and 2015, morning trips to Cairo’s Tora prison became a depressing routine. You covered trials of dissidents and protesters and former presidents. You also covered the trials of other journalists. The two-year trial and retrial of three journalists from Al Jazeera English, charged with spreading false news and belonging to a terrorist group, became a kind of microcosm of the larger crackdown unfolding in Egypt. The reporting got personal. You saw your colleagues in prison jumpsuits, held in cages during the trial.

I now live in Turkey, a country where press freedom is also deeply in crisis. After President Recep Tayyip Erdogan survived a bloody military coup attempt in July, he consolidated power and accelerated an already ongoing crackdown on political opponents and the media. Dozens of newspapers and radio stations have been shuttered and more than 100 journalists detained, culminating in October with the arrest of the chief editor and several top editors from Cumhuriyet, one of the country’s oldest papers. For freedom of the press in Turkey, winter is here.

Though American journalists have long faced challenges—declining public respect, collapsing papers and contracting budgets, increasing government secrecy—reporters in the U.S. never had to deal with being targeted on a broad scale by the President. But with the election of Donald Trump—who has repeatedly expressed hostility to large sections of the American press—that could change. Trump threatens to sue journalists. He denies access to journalists that cover him critically. He calls them scum, and at his campaign rallies would call out reporters he disliked by name. He praises authoritarian leaders from Turkey’s Erdogan to Egypt’s President Abdel Fattah el-Sisi, who are among the world’s worst jailers of journalists. (Sisi was reportedly the first foreign leader to call and congratulate Trump.) Just a few days after his election, Trump went on a Twitter rant against the New York Times. The Committee to Protect Journalists said in October that “a Trump presidency represents a threat to press freedom unknown in modern history.”

None of this is to say that America under Trump, even in the worst-case scenarios, will look like Egypt or Turkey. There is a long history of press freedom in the U.S., one that begins with the First Amendment to the Constitution. From Watergate and the Pentagon Papers to the Obama administration’s clampdown on whistleblowers, the American press often struggles with the government, but even under Trump, it’s all but impossible to imagine a U.S. government systematically jailing or killing journalists, as happens in some of the countries where I’ve worked.

Under the Trump administration, it’s not American journalists, but rather those in countries like Russia, Turkey and Egypt who will still face the greatest danger. But journalists working under authoritarian regimes can also offer some advice to American reporters and editors on how to thrive under difficult conditions. Even if the context and risks are different, the insights are portable.

Some of the advice is practical. Encrypt your data. Get burner phones. Lawyer up. But there’s also a deeper lesson: don’t give in to intimidation.

Hisham Kassem was the publisher of al-Masry al-Youm, one of Egypt’s only independent newspapers in the era prior to the country’s 2011 uprising that ended the 30-year-dictatorship of president Hosni Mubarak. In those days, Mubarak’s security agencies had the power to censor the press, yet Kassem somehow kept the presses rolling. I called him on Friday to ask him how he did it.

“With professionalism,” he said. “The security services called me in 2001 and I told them not to call me again.” Kassem essentially made an art of laying down his own rules of engagement with the regime. His message for Mubarak’s security men: If you want to shut us down, get an arrest warrant. Until then, he told them, “Go clean up your act.”

“We are not a political entity,” he said, reciting part of his speech to the security men. “We are a professional journalism entity. Thank you very much.”

In the brief moment between the January 2011 revolution and the July 2013 coup, Egyptians enjoyed a brief flowering of freedom. Massive protests became routine. The balance of power between the public and the police had shifted. It was also a moment when a raucous new media culture flourished. Newspapers and TV stations were founded. These outlets weren’t always high quality, but it felt like a moment of anything-goes experimentation.

All of that changed in the summer of 2013, when the military seized power and overthrew Morsi, backed by what it presented as a popular coalition. The state used lethal force to kill as many as a thousand protesters in one day on August 14, 2013. The new regime also shut down newspapers and TV stations, and established suffocating, if unspoken rules of censorship for the remaining media.

The street was no longer safe for journalists. There had always been dangers in covering protests in Egypt: crowd violence, sexual assault, police reprisal. But from 2013 onward, journalists felt threatened almost everywhere. They were beaten, arrested, shot dead in the street. They were charged with terrorism. In public, the security forces singled them out. In the words of Islam Osama, the Egyptian photojournalist who captured the iconic image of the killing of activist Shaimaa Sabbagh at the hands of riot police in January 2015: “If you carry a camera in the street, you’re a target.”

I developed a new kind of instincts reporting in Egypt after 2013. Don’t say anything sensitive on the phone. Don’t carry a big camera in public. When you’re out reporting, dress down so as to avoid attention. Carry your passport everywhere. Keep your credentials up to date. Do your interviews indoors. If you must do an interview in the street, keep it to a few minutes or less. Wipe your phone and computer of anything sensitive before you go through the airport.

There is a kind of fear that creeps in everywhere in Egypt. Every run-in with police, every time they check your documents or they hold you on the side of the road for snapping a photo, raises the specter of worst case scenarios: You think of the fate of the three Al Jazeera English journalists, imprisoned for more than 400 days. You think of many others reporters, all Egyptians, some sentenced to 20 years. You think of the photojournalist Mahmoud Abu Zeid, known as Shawkan, detained while documenting the crackdown of August 2013 and held for more than three years and now potentially facing the death penalty over at least nine charges. You tense with anxiety every time you venture out to do your job. You have nightmares about detention. You watch as your foreign friends leave the country one by one. You watch as some Egyptians leave too. And you do your job anyway.

You draw strength from your colleagues, who become like family. In Egypt, I took inspiration from the many Egyptian journalists who staked far more than me to document their country’s free fall from revolution to repression. They will take those risks, even after foreign correspondents leave. Some of the best are independent Egyptian sites like Mada Masr and indefatigable editors like Lina Atallah and writers like Hossam Bahgat. They soldier on, knowing they risk prison for their reporting. Like Hisham Kassem with his sharp retorts to the security men who harassed him, they refuse to give in to fear. You stand in awe of them.

I relocated to Istanbul at the end of March, and at first it struck me how, with the critical exception of the Kurdish southeast, Turkey seemed to lack Egypt’s omnipresent fear of talking in public. Even if the political situation was dire, people were generally open to speaking to reporters on the street. Yes, Turkey held journalists in its prisons, but some political debate still took place in the open.

That changed after the failed July coup. Erdogan’s government moved to close down opposition media. More Turkish journalists went to prison. Sources stopped wanting to talk on the record. In early November the government began arresting the leaders of one of the key opposition parties.

Everything changes now: the battles, the risks, the rules. All of that is at stake in a kind of struggle and negotiation between the government and the press.

So you just go on. You set up your stories. You set up some coffee. You do the interviews. You write. And you try to remember to breathe. 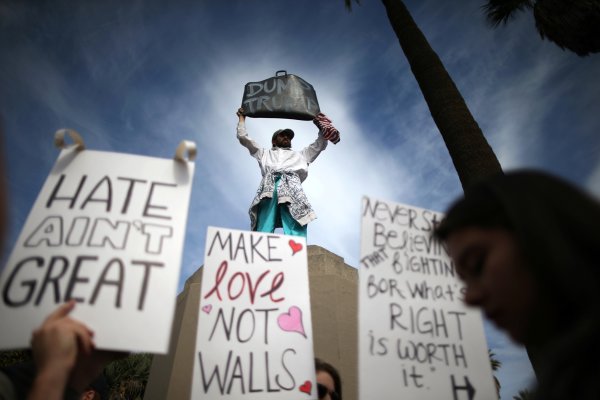 Racist Incidents Increase After Trump Election
Next Up: Editor's Pick