Review: Saturday Night Live Is in Mourning, But Won't Say Why

In the run-up to the election, the show had outsourced a Trump impression, enlisting the actor Alec Baldwin for a scathing take on the Republican presidential nominee. But in the sketch series’s first episode with Trump as president-elect, Baldwin was gone and no one had stepped up to replace him. Instead, Kate McKinnon, the show’s Hillary Clinton impressionist, performed a piano-and-vocals version of the late Leonard Cohen’s “Hallelujah,” then announced, “I’m not giving up, and neither should you.” Trump was nowhere to be seen, and neither, pointedly, was any comic take—this was the show openly mourning, in the same way it had after last year’s Paris attacks or after Sept. 11, 2001.

It was an open question as to who was not giving up—Clinton? An odd line of comic reasoning during “Weekend Update” had it that the candidate’s political career might continue, which seems more informed by emotive reasoning about how things should be than by even baseline interest in how things work. (This is a minor-key perpetual frustration with the show—later in “Update,” McKinnon’s Ruth Bader Ginsburg said President Obama should “confirm Merrick Garland.” How exactly would he do that?) McKinnon? She seemed to be working as hard as ever, it’s true, though actual comedy about what was lost when Clinton lost might have stirred the soul yet more. But if the message of resilience is meant to apply to the show at large, it’s both accurate and misleading. SNL is not, now, giving up when it comes to political satire, because it gave up a year ago.

After all, the tone throughout the episode—horror and disbelief that Trump won—went indulgently free from nourishment about what, exactly, about Trump’s win is worth mourning. And it was a garish mismatch with the tone the show set last November, when Donald Trump was just the leading contender for the Republican nomination and was invited to host, taking part in cute sketches that made him seem very well within the bounds of acceptability. It would perhaps be unfair to hold this against the show forever (after all, the cast and writers are not responsible for booking decisions) were the tone of the post-election show not doing quite so much in the way of elaborately telegraphed shock. It’s more than a little galling to watch comedians who helped Trump seem as fun, funny, and charming as he could this time last year express grave remorse at his win without even saying why it’s sad; after all, for a year, they’ve treated him as a figure of fun whom it’s a bit more trouble than it’s worth to treat as something other than Clinton’s equal and opposite. (It’s hard not to believe this is at least in part about access—after all, they might want to make an ask to Trump or some other Republican in future, and going too hard might not be seen fondly!)

While the surprise is evidently genuine—the show was so unprepared for a Trump win that they parted ways with Taran Killam, their in-house Trump impressionist, last season, and apparently had no plans to bring on a “Trump” full-time—it’s also overdone. The best way for Saturday Night Live to prove that they weren’t “giving up” would be to come up with a savage take on Trump, but the best they could do was a gag in “Weekend Update” about how both of the election’s candidates had been so unlikeable. Their special guest was McKinnon’s Justice Ginsburg, for no real reason other than that she’s a pop-culture figure who is relatively popular with left-leaning Americans. A show that had thrived on false equivalencies throughout the election—Trump is crass but Clinton is a paranoid climber; Trump was brought on for ninety minutes’ worth of free airtime, but other candidates are welcome, too—wasn’t going to give up now.

The episode seemed unclear as to whom it was even addressing: It was mourning something, and yet unwilling to go into detail about what it was mourning. A view-from-nowhere show that truly had no opinion about Trump would be a bad thing (it would be Jimmy Fallon’s Tonight Show) but this was somehow worse—offensive for its unwillingness to go there as an institution. The tonic came from outside, just as it had when Baldwin pushed against flaccid writing with a truly nasty Trump. Host Dave Chappelle began his time on-air with a biting and ultimately hopeful monologue about (among many other topics) the progress African-Americans have seen over many generations; it was fluid, transporting, and something it’s been hard to say about SNL for some time—insightful. (Similarly insightful was a sketch in which he and Chris Rock, as guests at an otherwise all-white Election Night party, ushered white guests into a world in which they’re disappointed with their country—reminiscent, though not biting the style of, a standout bit from Seth Meyers’ Late Night this week.) And yet when the episode wrapped, Chappelle was gone. Perpetually burnishing its status as a TV institution, SNL tends to rely on hosts and guests to import sensibility, but the difference between the sharp, rousing parts of the episode with which Chappelle was involved and the dry, flat parts where he was gone is enough to make viewers hope the show learned a lesson from the past year.

Maybe this was a rebuilding week, and Saturday Night Live will return with a take on our president-elect that finally leaves Clinton and her relative weaknesses out of it. But they’ll have to work quickly. Across the dial, TV excelled this year at comedy that addressed the Trump campaign. That none of it, from Meyers’s acidic “A Closer Look” segments to Samantha Bee’s fiery sermons, ensured a Clinton victory seems beyond the point, as comedy isn’t meant to be pure political advocacy—it’s meant to wring humor and insight out of the times in which we live. SNL just saying “Crazy times, huh?” wasn’t enough during Trump’s run, and it’s going to be inadequate to the point of pointlessness under a president who’s already divided America and placed oppositional press outlets under threat. The show can see it as an opportunity—to make itself great again by being as cutting, as wily, and as game for anything as the candidate it now purports to have been against the whole time. But first, it will need to actually be willing to offend with an actual point-of-view. No more songs—save the airtime for jokes. 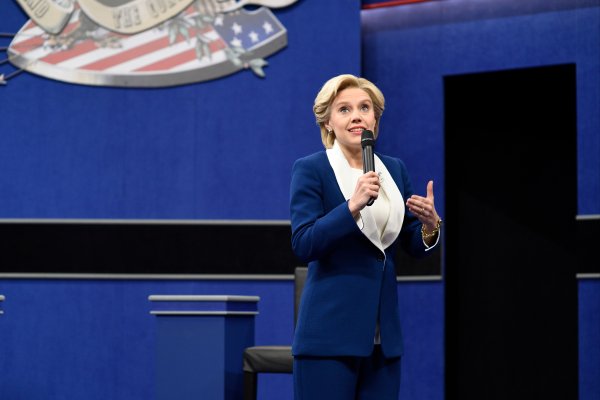