Third Eye Blind Singer: Step Back From That Ledge My Friends — And Get to Work

Stephan Jenkins during DKNY//Jeans Presents Vanity Fair "In Concert" to Benefit the Step Up Women's Network - Arrivals at The Wiltern in Los Angeles, Calif.
Mark Sullivan—WireImage
Ideas
By Stephan Jenkins
Jenkins is the lead singer, songwriter and guitarist for Third Eye Blind

I spent election night with a small gathering of close friends, 15 or so of us. We’re African American, Mexican American, Pakistani American, Chinese American, Indian American, super combo ethnicity American, and four-white-grandparents-all-born-here WASP American. We’re Jews, Muslims, Christians, a couple Buddhists, and a bunch of agnostics and atheists. Some of us were born here and some of us emigrated from India, Turkey, China and Uganda. Many of us grew up food insecure, some of us in upper-class homes, and some in foreign countries where America is the dream of the future. We went to Cal, Harvard, Stanford, Williams, Penn, and some of us didn’t go to college. We’re mostly hetero, a few are gay, lesbian and bi (we are sadly lacking in trans friends in my friend group). We’re high information voters. Many of us have little kids, who played and eventually slept, whilst the single biggest political disaster in any of our lifetime’s unfolded on the TV in front of us.

One of my friends employs more than a thousand people. He made jokes about voting to raise his taxes, again! Some of us were self-employed, some unemployed. We are artists and art curators, nonprofit workers, musicians, marketers, designers, founders of tech, consumer and mission-driven companies. Held in common is that each of us has worked hard (without the benefit of trust funds like you know who!) every day of our adult lives. Each of us had wagered all of ourselves, our passions, intellects and ferocious energies on uniquely, characteristically and gloriously American bets on our futures.

Most of us were with Hillary from the beginning. Some would have preferred Bernie. Some would just as soon have voted Republican. All of us to a one, wholeheartedly and actively, had been supporting Hillary Clinton for months—like our futures were at stake.

As the night progressed, we felt ourselves, in some way, being divorced from those futures. This feeling crept over us like the dull haze of a sudden breakup. I felt gutted. I noticed myself looking at the kids with an anxious question mark on my face.

Some of the women in our group, who had been groped and verbally assaulted in the past, folded their arms or hugged their knees in the body language of self-protection—like sexist culture just got a high-five.

We made gallows humor about hiding under the floorboards of a friend who voted for Trump. We made fun of racists. It didn’t really ease the mounting tension.

We started to use words like “horrified,” “crestfallen” and “appalled.” And then, dumbfounded, we dispersed. All that was left for me was a listless un-nourishing sleep. I felt unmoored. There were basic givens in my American identity that no longer existed. The integrity of institutions, the reliability on the collective decency of Americans—poof.

When I woke up the next morning, I hit Twitter up and posted some recriminations. It brought no relief.

I thought about President Obama and how the vast list of accomplishments of his elegant, brilliant presidency could be erased, not because of anti-establishment backlash but because, as it seems to me, a segment of America cannot stand it that he is black. I thought about how we’ve run out of time on global climate change. I felt sick at heart.

So I did what I do when I’m overloaded with trauma. I put on my wetsuit, and I went surfing. I caught a foamy, mushy wave and dropped into the green face and snapped a couple hacks before it closed out and obliterated me. Ahhh. As I paddled back out, I saw a 19 year-old girl surfing in a bathing suit, sans neoprene, in Northern California in November. Talk about resilience. I paddled in, and as always from surfing, feeling better than before.

When I got home, I checked my email thread from friends at the election party and each said something similar to this one: “Let’s get to f-cking work.” And there it was. I was done whinging.

I love this group of friends completely and fiercely. I realize that they are the holders and source of my American ideals, even more so now as my other beliefs have been shaken. If there’s any such thing as real Americans, we’re it. I hope for success for all Americans in the next administration.

We’re not intimidated by Trump or the bigots he enables. We’ll give him a chance and hope that he does not come into office as the grotesque candidate that he campaigned as. We won’t wish for his failure (like Mitch McConnell, Newt Gingrich and the Republican obstructionists did for Obama), because we’re patriots. I sincerely hope that every ludicrous piece of gibberish he spewed during the campaign was a lie to get elected and that he will govern in some reasonable way.

We’re already seeing the racist, misogynistic ugliness, with which Trump infected the campaign, be mimicked by school kids emboldened by his example. Still, I hope this divisive film he’s slathered himself in evaporates, revealing a leader capable of inspiring unity. Really, I do.

And I will keep an open heart to the people who voted for Trump. As long as they do not prove themselves to be bigots or climate-change deniers, I will try to assume good intention and that they truly believe he’s the one who’s going to include them in the global economy—oh brother. We do not have to agree to get along. (But one more time: shame on you for voting for this man.)

For myself, I intend to be more woke than ever to issues of social justice, racism, sexism and climate action. I am going to volunteer more in my neighborhood, continue to teach Vets with PTSD in the Ocean Therapy program, and get deeper into the climate revolution. That’s my vow.

I still woke up this morning, just days after the election as if jolted from a nightmare—only to find myself in a nightmare! I still believe America got played by a demagogue, who’s only motivation in his service-free morally-challenged life, is to fill his unfathomable emptiness with ego gratification. And there’s a little voice telling me, the electoral college might still give this to the popular vote winner (Hillary) if they find out we just elected a Russian agent.

But, like I said, I’m open! I take great inspiration and hope from the group of Americans I call friends, and I wish all my fellow countrymen and women happiness and peace. 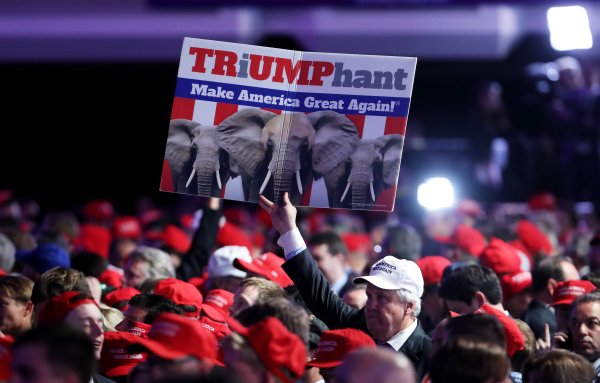 The Revenge of the White Man
Next Up: Editor's Pick