What to Know About Julian Assange's Legal Situation

The longest staying and most controversial houseguest at London’s Ecuadorian embassy is being questioned Monday over a rape allegation in Sweden, potentially ending a four-year saga that began when Wikileaks co-founder Julian Assange took self-imposed exile there.

His questioning on Monday hinges on sexual assault and rape allegations that were first made in 2010. Here’s what we know about it:

Who is questioning him

Originally planned for October, the interview was postponed so that Assange’s lawyer could be present. “After the report, the Swedish prosecutor will take a view on the continuing of the investigation,” continued the statement.

What are the allegations

In Aug. 2010, Sweden’s Prosecutor’s office issued an arrest warrant for Assange over four allegations, of which three had five-year statutes of limitations that have since expired.

A leaked confidential Swedish police report in 2010, seen by the New York Times, said two women claimed separate sexual encounters with Assange that began consensually, but turned nonconsensual. Assange allegedly demanded to have unprotected sex with each of the women, despite their insistence that he use condoms. The second woman, known as ‘Miss W,’ alleged that Assange initiated sex with her while she slept, and without wearing a condom. Her claim led to prosecutors listing rape as one of the charges, which forms the basis of Monday’s questioning.

Assange has admitted to the sexual encounters, but insisted that they were entirely consensual. He sees the charges as a smear campaign and said, at the time, that the claims were “without basis” and their appearance “at this moment is deeply disturbing,” BBC reports. Earlier that year, his whistleblowing website was criticized for leaking more than 75,000 classified U.S. military documents on Afghanistan.

Why he’s in the Ecuadorean Embassy

Assange was questioned in Sweden in Aug. 2010 and told of the charges against him. After being released, he flew to London. In December of that year a court in Stockholm approved an international arrest warrant for Assange, on suspicion of several counts of sexual molestation, rape, and illegal use of force. Assange handed himself to the police and was granted bail, with the backing of high-profile journalists and celebrities like film-director Ken Loach and British socialite Jemima Khan.

He proceeded to fight his extradition to Sweden in British courts until 2012, when the U.K’s Supreme Court ruled against his appeals. Assange was given 14 days to challenge the decision, but in June that year he broke the terms of his bail conditions and fled to the embassy of Ecuador, which agreed to give him political asylum.

The Wikileaks co-founder and his supporters claims that if he is extradited to Sweden, he could be at risk of being extradited to the U.S to face trial for espionage in America. According to the Washington Post, the Justice Department concluded in 2013 that there was no way to prosecute him.

What other legal woes he faces

The investigation into the allegations have been on hold since Assange sought asylum. This is mainly due to Assange’s legal team, Ecuadorian and Swedish authorities being unable to agree on where and how Assange should be questioned until now. Even if he is not indicted for the rape allegation, which is not due to pass the statute of limitations until Aug. 2020, Assange faces another hurdle: he could still be arrested by British authorities for violating the terms of his bail agreement by ensconcing himself within the embassy building.

It has been reported that the 24-hr police presence at the embassy to prevent Assange from escaping has cost London’s Metropolitan police $18.3 million. 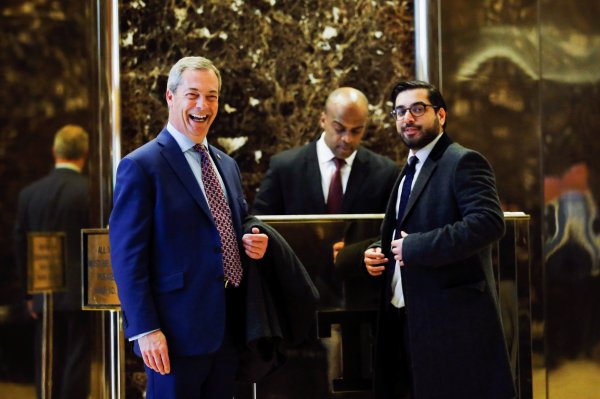 Trump Meets Farage Ahead of U.K. Leader
Next Up: Editor's Pick