As one of Taiwan’s most famous rock stars, Freddy Lim used to express his politics by screaming death metal lyrics for his band Chthonic, the “Black Sabbath of Asia.” Now, at 40, while still sporting his trademark ponytail and playing the occasional gig, Lim has taken a political path as a new member of Taiwan’s legislature, but his message of independence from China remains the same.

The charismatic “rock ‘n’ roll lawmaker,” known for his black face paint and fondness for leather, is now promoting a “Team Taiwan” competition to design a new flag and anthem to be used by the island’s athletes in the 2020 Tokyo Olympics, one which better represents the ethnic diversity of the island. (The current flag bears the logo of the Chinese nationalist Kuomintang, or KMT, which wrote the anthem; Lim argues that this does not reflect Taiwan’s ethnic or political diversity.)

Taiwan, officially called the Republic of China (ROC), competes in every Olympics but must do so as “Chinese Taipei,” an awkward handle based on the name of its capital city. The title emerged from a controversial 1979 ruling by the International Olympic Committee under pressure from mainland China. Aside from its name, Taiwan cannot use its national anthem or flag. Athletes instead receive their medals under a banner depicting the five Olympic rings that has been compared to the refugee flag used this past summer in Rio de Janeiro.

The flag and anthem competition, which ends on Dec. 5, offers an outlet to growing public frustration that the island has virtually no international recognition, even though its 23 million people operate their own government, currency, military and foreign policy.

“We self-govern so actually we are an independent country. What we are asking is to have equal rights, to join and participate in the international community,” says Lim. “Most people in Taiwan don’t feel comfortable having our national team called Chinese Taipei. This title doesn’t represent this country.”

But any nod to Taiwan as a separate nation is vehemently opposed by China, which views it as a renegade province to be one day reclaimed — by force if necessary. Beijing lobbies relentlessly to exclude Taiwan from global forums to undermine its legitimacy as its own nation. As a result, Taiwan has been blocked from joining most international bodies, extending from the U.N. to cross-border networks like Interpol or the International Civil Aviation Organization. Most countries, wary of offending China given its economic might, do not have official diplomatic relations with Taiwan.

Taiwan’s troubles stem from a complicated past. When the island was freed from Japanese colonial rule in 1945, it was governed from mainland by the KMT. In 1949 the KMT fled to Taiwan from the advancing Communist Party. The nationalists kept their claim to all of China, however, and initially ruled their new island home with an iron fist, invoking martial law.

Taiwanese society eventually evolved toward democracy and the opposition Democratic Progressive Party (DPP) was formed in 1986. The DPP, which is currently in power, represented a shift in public sentiment toward independence rather than reunification with mainland China. Few citizens want to provoke a war with Beijing by declaring full independence, and the domestic status quo is comfortable even if the lack of international status is grating.

“Taiwan is functioning as an independent state whatever China says and whatever the history,” says Roderic Wye, an Asia expert at the London-based think-tank Chatham House. “The reality on the ground is that Taiwan is independent even if it is operating under the shadow of China.”

A poll released in May by the Taiwanese Public Opinion Foundation found that 80% of respondents identified as Taiwanese, and 51% favored independence. This is particularly true of the younger generations, many thousands of whom joined the 2014 Sunflower Movement to protest further economic integration with China. Hundreds of Sunflower protesters occupied government buildings and hundreds of thousands took to the streets to denounce a trade pact with Beijing that they feared would hurt Taiwan’s economy.

The protest, and Taiwan’s earlier democratic opposition movement against the KMT, have been closely observed by Hong Kong activists now fighting their own independence battle. “I think young [Hong Kong] people come here to understand and to learn from the experience of the opposition movement, how we fought against the KMT, how to organize, how to mobilize,” says political analyst Antonio Chiang.

Lim recently tried to go to Hong Kong but was denied a visa. “Their freedom is shrinking — even their friends cannot visit there,” he says. Though he just wanted to attend a concert, the authorities presumably feared he could stir things up in the heated political atmosphere.

Lim has a history of activism that began in the mid-1990s as lead vocalist for Chthonic. The band advocated independence for Taiwan, minority rights and self-determination for Tibetans. He then headed up the Taiwan branch of Amnesty International before founding the New Power Party as the political successor of the Sunflower Movement. The NPP won five seats in this year’s national election and is now touted as the third force in a parliament dominated by the KMT and the DPP.

Honor guards prepare to raise the Taiwan flag in the Chiang Kai-shek Memorial Hall Square in Taipei on Jan. 14, 2016, ahead of the Taiwanese presidential election
Ulet Ifansasti—Getty Images

Although still trying to establish itself, the NPP has an advantage over the DPP, which was now the “establishment of the middle class,” says Chiang. The NPP “have some chance because they are young, have fresh ideas and have a lot more energy, and the whole generation of the Taiwan independence movement is supporting them.”

Lim is old enough to remember martial law and book bans under the KMT, but young enough to connect with millennials who are increasingly assertive about Taiwan’s autonomy.

“The younger generation have been called the natural independence voters,” he says. “Most want to see Taiwan equally participate in the international community.”

For Lim and his growing band of independence supporters, their ambitions extend beyond sports competitions, to defeat Beijing’s opposition to Taiwan’s membership of all international bodies, including the U.N. Many analysts view this as an impossible goal.

“I think both Hong Kong and Taiwan have the right to independence but I don’t think the Chinese leaders or government will agree to that,” says Hsu Hsiang-tao, an associate professor at Taiwan’s Tunghai University.

Lim is ready to play the long game. “It’s very difficult to say how the world will be in 10 years so I do believe that we should keep our voices out in the world year by year … to let people feel that the Taiwanese want to be helpful and supportive,” he says. “Then, when there’s an opportunity for the world to accept Taiwan as an equal participant in the international community, we will be ready to join.” 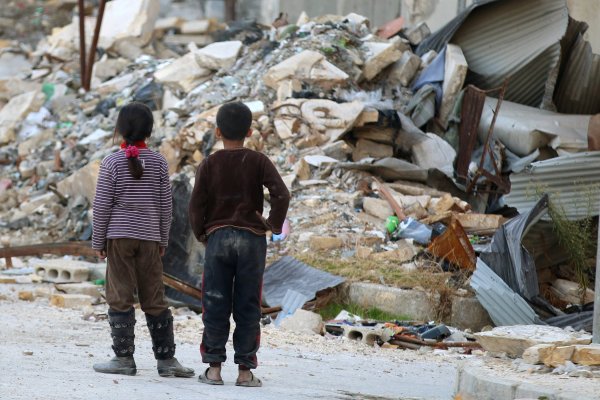 Rebel-Held Aleppo Has Run Out of Food
Next Up: Editor's Pick