Vermont Sen. Bernie Sanders points to a supporter during a Get Out the Vote rally at Colorado College, in which he campaigned for Democratic presidential candidate Hillary Clinton, on Nov. 5, 2016, in Colorado Springs, Colo.
Colorado Springs Gazette—TNS via Getty Images
By Melissa Chan

Bernie Sanders on Thursday declined to say whether he would have fared better against President-elect Donald Trump than Hillary Clinton, who beat him in the Democratic primary race.

The Vermont senator, in his first interview since Tuesday’s election, told CNN that he “would have loved” to have gone head-to-head with Trump in the general election but that there is no point in discussing the hypothetical matchup anymore.

“What good does it do now? The election is over,” Sanders said. “Donald Trump won. I would have loved to have had the opportunity to run against him, but that did not end up being the case. Right now, where we are is where we are.”

“We’ve got to look to the future,” he added.

Sanders also reiterated the message he made in a statement issued the day after Election Day that said he intends to work with Trump on issues that affect middle-class working families—but that he would fight Trump’s inflammatory rhetoric.

“I will vigorously oppose him if he appeals to racism or sexism or some of the other discriminatory measures that he brought up during his campaign,” Sanders told CNN on Thursday. “If he is going to resort to bigotry, trying to divide us up, we will oppose him tooth and nail.”

Sanders said he has not yet spoken to Clinton after her bruising battle with Trump. “I owe her a call, and I will make that call, but I have not,” he said. 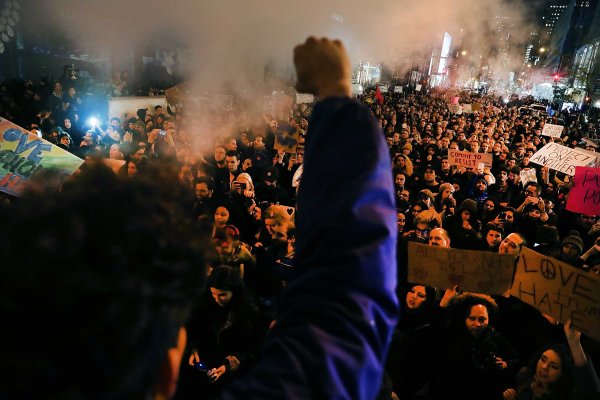 Watch the Anti-Trump Protests Up Close in This 360-Degree Video
Next Up: Editor's Pick