President Obama and President-elect Donald Trump did not debate politics or policy during their 90 minute meeting in the Oval Office on Thursday. The focus was on the transition, which is why, White House Press Secretary Josh Earnest told reporters after, both parties characterized the meeting as “excellent” after it ended.

“The meeting was focused on the transition and it went well,” he said, adding that the two “didn’t recreate some sort of presidential debate in the Oval Office today.”

The Oval Office meeting was the first time the two men had ever met face-to-face and after both agreed the gathering went well in their brief remarks to reporters. Trump suggested the meeting was scheduled to only last about “10 or 15 minutes,” but the White House said after President Obama had always set aside more time for the two to chat.

Though Earnest insisted the meeting primarily focused on the transition, including “staffing and organizing at the White House,” foreign policy and national security were also topics of discussion during the Oval Office meeting. The press secretary said the two also discussed issues President Obama expects will arise on an upcoming trip to Europe and Latin America.

The White House says Obama remains impressed by the tone Trump has taken in the immediate aftermath of the election, but on Thursday Earnest made clear that the views of a president who just days ago referred to his now-successor as “uniquely unqualified” for office have not changed.

“The president’s views haven’t changed. He stands by what he said on the campaign trail,” he said.

During the Oval Office meeting, the First Lady had tea with Melania Trump and took her on a tour of the private residence and the state floor. White House curator William Allman joined the two women on the tour. They are said to have discussed raising children in the White House given that the Trump’s youngest son Barron is 10. 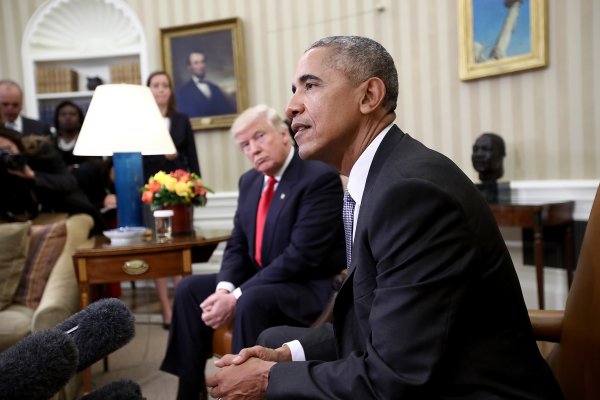 Read Obama and Trump's Remarks on Their White House Meeting
Next Up: Editor's Pick