For months, certain factions of Harry Potter fans have been skeptical about Fantastic Beasts and Where to Find Them. The prequel felt like an unearned excuse to dip back into J.K. Rowling’s wizarding world, nine years after the books ended and five years after the last film left theaters. Did the plot have to move to America? Could the franchise support yet another narrative about a massive fight between good and evil? And with five movies announced for the series, it seemed unlikely that viewers would show up in overwhelming numbers.

Then Donald Trump was elected—and what was once just a fantasy story now, for some, may have echoes of reality.

Rowling herself tweeted about the election soon after the results came in early Wednesday morning: “We stand together,” she wrote. “We stick up for the vulnerable. We challenge bigots. We don’t let hate speech become normalised. We hold the line.” Soon, she was explaining that the plot of Fantastic Beasts was actually inspired by the newfound popularity of leaders like Trump. “I conceived the story a few years ago,” she said a premiere event in New York, “and I think I was partly informed by a rise in populism around the world.”

Fantastic Beasts takes place in the 1920s, but Rowling has crafted many resemblances to the current global political landscape: Bankers and politicians are uncaring; newspapers and political publications hype fear; a hardworking veteran can’t get the loan he needs to start a small business. Distrust between the wizarding community and the “No-Majs” (that’s Muggles in American dialect) is enormous. A black woman may be in charge of the Magical Congress of the United States of America (MACUSA), but the battle for tolerance and inclusion is steeply uphill.

For millennials, Rowling’s work has always served not only as an instructional text about tolerance and valiance—a kind of call to arms to do the right thing—but also as a security blanket. In times of anxiety and depression, fans have frequently returned to the books for comfort, not only for the way they recall one’s youth but for the warm feelings that their message of love and triumph inspires. On her Twitter feed, Rowling has even served as a virtual counselor to readers struggling with personal issues. For example: “Being anxious isn’t who you are, it’s something you’re feeling. It will pass.”

In the wake of Trump’s victory, fans expressed their disappointment on social media through the lens of Harry Potter. Some said they’d be reading the novels for comfort. Others shared inspirational quotes from the books. Others called for a proactive, progressive movement in the spirit of Dumbledore’s Army.

There’s no equivalent to that group at the end of Fantastic Beasts; there’s just a loose coalition of people going back to their work, trying to do a good job, and hoping the worst will not happen. The division between good guys and bad guys is not as clear here as it was in the original Harry Potter series. But that may better serve today’s viewers, who—at their best—are striving to connect with people who have differing beliefs, reaching across divisions to band together. 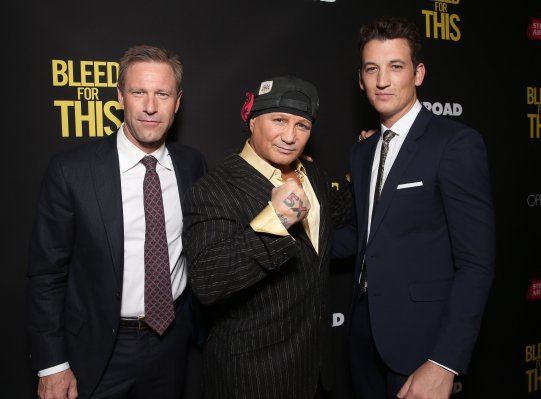 Miles Teller and Aaron Eckhart on Why Bleed For This Is More Than Just Another Boxing Movie
Next Up: Editor's Pick