The Revenge of the White Man

A supporter holds up a sign in support of Republican presidential nominee Donald Trump during the election night event at the New York Hilton Midtown on Nov. 8, 2016.
Spencer Platt—Getty Images
Ideas
By Jill Filipovic
Filipovic is a lawyer and writer.

Tuesday’s election was the revenge of the white man. In a stunning result virtually no one predicted, Donald Trump won the vote for president of the United States. His opponent, Hillary Clinton, who would have been our country’s first female president, was supposed to give her victory speech at New York City’s Jacob Javits Center. Instead, she stayed silent through the night, and a dazed political press corps filed out under the building’s still-unbroken glass ceiling.

There is a lot to fear in a Trump presidency—economic chaos, entrenched bigotry and xenophobia, the demise of American international power. But there’s just as much to fear in the American people and, especially, in the white America that elected Trump.

White voters supported Trump overwhelmingly. White men were his strongest backers, although white women also favored him, with older white women, Evangelical white women, and white women without college degrees helping to carry him to victory. “Economic anxiety” was the story of this election. But the economy is good. White men with college degrees voted for Trump while working-class voters of color did not. And there is the simple fact that white Americans just voted in a president who was endorsed by the Ku Klux Klan. That isn’t anxiety about the economy—it’s anxiety about the changing face of power in America.

This contest wasn’t about policy, despite Clinton’s best efforts. She put out detailed papers and proposals, while Trump relied on media-ready pieces of bite-sized vitriol—build a wall, ban Muslims. No, this was a contest of identity, both individual and American. Are we a country most proud of our progress, inclusiveness and evolution, or are we a country deeply attached to traditional power structures, exclusivity, and racial and gender hierarchy? The emerging, changing, diverse America—people of color, women with college degrees—voted for Clinton. The America tied to the past, and the Americans who mostly benefit from the old order of things—white men, and more white women than not—voted for Trump. There are probably more of us than there are of them. But on Tuesday, more of them were motivated to turn out in the states that mattered.

They were motivated because the world is changing around them, and Trump promised to turn back the clock. This appeal to tradition is an enduring quality of right-wing American politics, and the Republican Party has long billed itself as the party of “traditional values.” In the United States, tradition has been unkind to women and people of color. For more of our history than not, we have been a nation of profound and legally-entrenched inequality: slavery and segregation, rights to vote for white men alone, laws against women determining the outcomes of their own pregnancies and blocking our ability to say no to unwanted sex.

For half of America, transcending these old bigotries is a point of pride—we are the ones who shed tears of joy when Barack Obama was elected, who put on our pantsuits to go vote for Hillary. But the other half, it seems, wants to go backwards, and they were ready to fight for that return. For these Americans, the progress we’ve made is a source of anger and resentment. For them, America was fair before, and now gives unearned advantages to women and minorities (that women and minorities still lag is evidence only of the inherent superiority of white men). These voters support a man buoyed by white supremacist groups, but they’re tired of being told they’re racist. They support a man who brags about sexual assault and the relish the idea of jailing his female opponent, but they’re sick of women mouthing off about sexism.

When you’ve been at an advantage for 200 years and simply assumed that was the natural order of things, a more even playing field feels like an unfair disadvantage. It adds insult to injury to hear political and media elites tell you you’re privileged, especially when you look at the White House and see a black man sitting in the chair that men who looked like you occupied without interruption for more than two centuries. The idea that a woman may sit there next feels like an unbearable affront to your own identity: what is a white American man, after all, if not the man in charge? What is a white American woman if not a fragile feminine creature to be protected—not some ambitious, pantsuited harpy telling men what to do.

Across racial groups, there was a gender gap of close to 10 points in this election, with many more men than women voting for Trump. Fewer than a third of white men voted for Clinton, and fewer than half of white women. In the wake of Trump’s white-bolstered victory, minorities targeted by Trump—immigrants, Muslims—are wondering if they’re safe in America. Political scientists and lay speculators are wondering if the United States can survive a Trump presidency. Despite Trump’s victory speech calls for unity, many of Americans now find ourselves looking at a country we don’t recognize, feeling like the fundamental promise our nation made to us—you belong—has been irreparably broken. The overwhelming numbers of white men who sought their revenge in this election certainly got what they wanted when they took Hillary Clinton down. But they may also have taken the future of the country down with her. 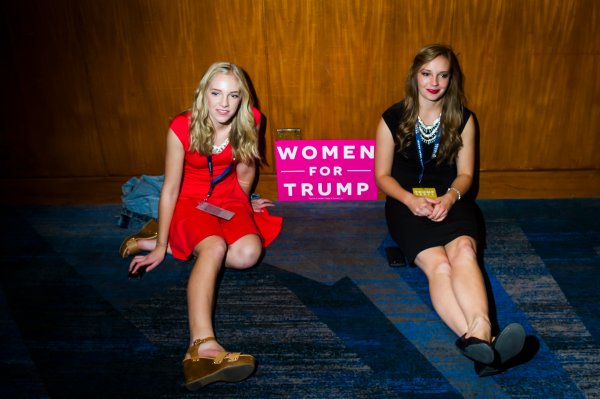 Why So Many Women Abandoned Hillary Clinton
Next Up: Editor's Pick