Chris Reilly, a commissioner in York County, Pennsylvania, has lived in the heavily Republican area north of Baltimore for 28 years. On the day in September after Mike Pence spoke to some 800 folks in downtown York, Reilly scanned a panoramic picture of the crowd in the local paper and had a shock. “I recognized one face,” he said. That’s when the party stalwart knew something was going on.

Then, on a recent Friday, Reilly got word that the county had received 9,000 absentee-ballot applications in a single day. It had to mail them out by Monday but had no money for extra help. So Reilly turned up at the election office on Saturday to stuff the applications into envelopes himself. As he did, he noticed something surprising. The applications were running 10 to 1 male. And when he peeked at the employment lines, he saw a pattern. “Dockworker. Forklift operator. Roofer,” Reilly recalled. “Grouter. Warehouse stocker. These people had probably never voted before. They were coming out of nowhere.”

Back in Manhattan, at the gilded Trump Tower, the most unconventional campaign in history put its faith in these voters. Hillary Clinton and her allies had run three TV ads for every one that Donald Trump got on the air. Her ground operation had tens of thousands more volunteers and hundreds more field offices. Trump had lost each of the debates against Clinton, and he had spent weeks defending himself from a video in which he bragged about sexually assaulting women. But only the Trump campaign had a candidate who had struck a nerve. Only the Trump campaign had a message that was breaking through.

“To a person, there was never a doubt that we could come back and win this race,” said Trump’s communications adviser Jason Miller, one of just a handful of senior staff members who guided Trump through the final weeks. They saw it at the rallies, which they believed were a better measure than the polls. “You go to Scranton, you go to Dayton and ask those guys, ‘Hey, do you feel like you have had 2.5% GDP growth this quarter?'” Miller told TIME just before Election Day. “They’ll look at you like you have three heads.” There were two Americas after all, and one of them demanded to have its voice heard.

The task of the Trump campaign was to tap this seething populist distrust of the nation’s elites, and they had no better foil than Clinton. From the beginning, Trump presented himself as a disruptive app; his campaign staff compared him to Uber. He had authenticity. He could draw a crowd. He could make statements–often outrageous and regularly false–that would spread through the media and social networks like wildfire. He was what the wizards in Silicon Valley call a platform: something new that people didn’t know they needed, and which everyone could use as they wished.

And like a killer app, Donald Trump mowed down every challenge. It was his message, his vision, his stubbornness and bombast that changed the country. Trump was the one who picked immigration and trade as his signatures issues. He recognized the populist tide waiting to be unleashed. If he stopped tweeting and started reading his speeches in the final weeks, it was only because he finally chose to heed long-ignored advice. Only those closest to him saw the upset coming.

For Corey Lewandowski, Trump’s first campaign manager, the initial signs came early. Weeks after the campaign launched in June 2015, Lewandowski booked a stop in Laconia, N.H., a town of about 17,000 that hosts the state’s pumpkin festival. “We land at the Laconia airport. I look and I literally have 15 messages, all from the same phone number,” he remembers. It was the local police. “We’ve got a problem at the venue,” the officer said.

A cruiser was waiting by the tarmac. So many people had turned out that the roads had been shut down. Two miles from the venue, cars lined the shoulders, because people had parked to walk. When the event was over, nearly 200 people followed Trump’s entourage to the airport to send him off. “I said, ‘Wow,'” Lewandowski recalls. “This is beyond anything.”

This was the simple notion Trump and his ever-shifting team decided to build the campaign around. If he could keep the crowds, he could win. He wanted to fill them with spirit. He wanted to be fun. He was outrageous, a vessel for their anger. The larger the target he could topple, the better. No one would have advised him to do any of this, not even Lewandowski.

Time and again, Trump’s advisers objected as he broke rules. A few weeks before Election Day, Trump promised a meaty policy speech in Gettysburg, Pa. Instead, he used the historic stage to threaten to sue the women accusing him of sexual assault. Campaign manager Kellyanne Conway pleaded with him to stay on message. But he would not be tamed. “You don’t tell Trump you can’t do this, stop doing that,” said RNC strategist Sean Spicer. “You say, ‘You know what would be more helpful or more effective?’ Or, ‘Right now the Dems are taking advantage of how you’re saying this.'”

For weeks his advisers told him his closing pitch to African-American voters–“What the hell do you have to lose?”–could probably be better phrased. But then a black pastor in Charlotte, N.C., came out after a shooting, echoing the same words to reflect his frustrations. “I think he’s going to really surprise people with the numbers he gets among African Americans,” said Miller. In the end, Trump won 8% of the black vote, according to exit polls, two points more than Mitt Romney got four years ago.

Lewandowski points to another moment when it all came together for him. In the final sprint to the South Carolina primary in February, his cell phone buzzed with leaked word that Pope Francis had slammed Trump’s pledge to erect a wall between the U.S. and Mexico. It was “not Christian,” the popular Pontiff declared. In the tradition of the Vatican, the news wouldn’t become public for an hour or two. Lewandowski advised caution as he searched his phone to find the Catholic share of the state’s electorate. “You don’t understand,” he told his boss. “I’m Catholic. This is the Pope.”

But the reality host turned candidate had other ideas. “He just loves Mexico. He’s brainwashed,” Lewandowski recalls Trump saying. Without delay Trump dictated a response, calling the Pope’s words “disgraceful.” The next day, the Pope released another statement, making clear he had not attacked Trump and was not indicating a political preference. Trump claimed victory. The reality show was real.

While Trump shot from the lip, the mechanics of building a campaign fell on others to figure out. A 15th-floor office in Trump Tower was filled by young staffers, many of whom had never worked on a House race, let alone a presidential bid. Wearing suits and slicked-back hair, they took their cues from the candidate in more ways than one. There were few late nights or early mornings, but lots of bravado. “It’s the island of misfit toys,” one staffer said of the scene.

When Trump clinched the GOP nomination on May 3, he had no machine to drive his message. The skeletal campaign had fewer than 75 staff members, no field program or data operation and a meager fundraising outfit. But the Republican National Committee was ready to pick up the slack.

Aides deployed to San Antonio, the home base of Trump digital director Brad Parscale. A tall, bearded web designer who started his small business 12 years ago with $500, Parscale latched on with the campaign after working for Trump’s companies. Through the early primaries, Parscale ran the digital team from a laptop in his living room. But he would emerge as one of the most powerful operatives in Trump’s orbit, earning the ear of the candidate’s influential son-in-law Jared Kushner. Parscale and his team tested countless combinations of Facebook ads, designed to turn out disaffected whites and sow doubts among young voters and minorities about Clinton.

By the campaign’s end, senior aides said, Parscale had say over everything from the budget to creative, and from voter targeting to the candidate’s schedule. He and deputy campaign manager David Bossie spent hours tossing a football in Trump Tower as they planned Trump’s final campaign stops.

The big guns were run out of Washington. The national party had more staffers and full-time volunteers than in 2012, and its field army contacted some 20 million voters. “Every single thing Trump did that had anything to do with direct voter contact–a paid TV ad, a paid mail piece, paid phone call, door knock–was done because the RNC told him these things needed to be done,” said Katie Walsh, the RNC chief of staff. Parscale credited their “hand in glove” relationship.

In the final weeks, the RNC’s team was sending daily updates on where to send the candidate and put ads on television to reach more voters. Yet still even the party’s own models did not predict this victory. Just before election night, Republican aides told reporters they believed 12 states were within three points. At least eight broke for Trump. He won many of them handily. Inside Trump Tower, Parscale was an optimist, projecting nearly the entire electoral map correctly on the Friday before Election Day. (His models missed the mark in Colorado and Wisconsin.)

Victory brings a happy challenge of huge proportions. Between now and Jan. 20, Trump’s transition team must fill roughly 4,000 government jobs, from high-profile Cabinet positions to bureaucratic backwaters. It’s a challenge for any incoming Administration, but Trump’s transition team is thin even by his standards. The effort is made up of about 100 people, the vast majority of whom are volunteers. Trump’s transition chair, New Jersey Governor Chris Christie, despite being distracted by the criminal prosecution of two former top aides, has spent recent months interviewing potential candidates.

But vetting for top posts has yet to formally begin, foreshadowing a frantic scramble. “It’s very different” from a traditional transition effort, says a senior team member. “I think Romney had a better idea of what he wanted to do.” Alabama Senator Jeff Sessions told TIME on Nov. 9 that “many decisions” had yet to be made.

One thing Trump knows: GOP chair Reince Priebus is the favorite to become chief of staff, according to two people familiar with Trump’s thinking. That will reassure many Republicans, including House Speaker Paul Ryan, who must try to bridge their differences with a candidate who stormed to power by smashing the party’s cherished principles.

There are signs that Trump will defer to Republicans in Congress, which could provide an ironic coda for the party he once seemed to break into pieces. With control of both ends of Pennsylvania Avenue, the GOP is poised to realize a suite of once distant dreams: the potential for a new conservative majority on the Supreme Court, a repeal of all or part of Obamacare, dramatic reductions in tax rates, new military funding, an enhanced enforcement of immigration law and a historic rollback in environmental regulations. “He just earned a mandate, and we now have a Republican unified government,” Ryan said on Nov. 9.

The candidate many Republican leaders once could not stomach could become their savior. But only if he chooses to. The one thing we know about the next President is that he will run much of the government, and the nation’s relationship with the rest of the world, exactly as he pleases. 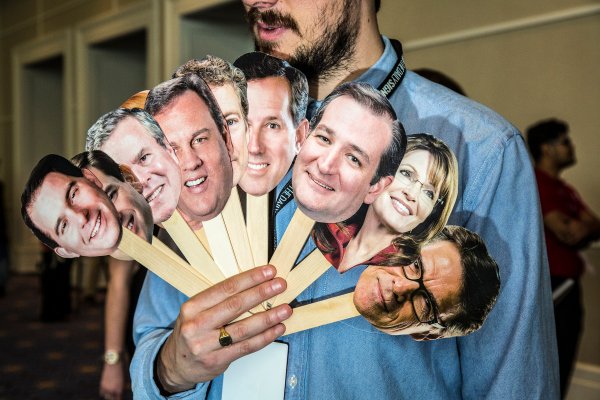 What Comes Next With President Trump
Next Up: Editor's Pick