What’s Next for Democrats After the Clintons?

Long before the age of Obama, when Democratic candidates more routinely lost presidential campaigns, progressives typically went through three stages following an electoral defeat: shock, denial and then a lurch to the left. The party that has held the White House since 2008 was well on its way through stages 1 and 2 by the time the sun had risen on Wednesday morning. A boogie to port can’t be far behind.

For many, Hillary Clinton’s defeat will be treated in Democratic circles as a failure of nerve: if only she had fully embraced the flinty populism of socialist Bernie Sanders, she could have made quick work of Trump. If only. In fact, Clinton was beset by a sea of shortcomings that contributed to her defeat, many of them having nothing at all to do with her ideology or lack thereof. It was sometimes hard to know what Clinton was really for. She wasn’t a natural pol. Her husband was a handicap. Pick your own reason.

In American politics, personnel is policy. For the Democrats, something else is at work. A generational change is overdue: Clinton is 69; Sanders is 74; and Joe Biden is pushing the same number.. Michelle Obama has said she will never run for President. President Obama will retire to private life. And the party’s middle-aged stars burn dim.

Clinton’s loss means that the Democratic Party will have to take a long, hard look in the mirror and ask, Where do we go from here?

Undoubtedly, this will require new faces to step to the forefront, but the bench looks thin at the moment. “It will be a fresh start for the Democrats, and it will give many smart, emerging Democrats an opportunity to forge leadership roles in a post-Clinton Democratic Party,” says Democratic strategist Simon Rosenberg.

How many of them lead from the left remains an open question. If anything, this year’s election results threw doubt on the dream of Barack Obama, to build a lasting coalition on generational and demographic change. White working-class voters swamped young and minority voters in key states. According to exit polls, more than half of white men and women voted for Trump, including 7 in 10 white voters who did not attend college. Swaths of votes from union members, a traditionally Democratic voting bloc, went to the Republican nominee. The industrial Midwest, once a Democratic working-class stronghold, crumbled in the face of a Clinton candidacy.

The debate will now begin about the best way to win back this crowd. In 2008 and 2012, Obama was able to position himself as the economic champion of these communities–as the man who would bring hope and change after George W. Bush and the President who had saved the automobile industry. Clinton used similar language, but could never make the sale.

While the liberal populism of Sanders and Massachusetts Senator Elizabeth Warren offer one path to re-establishing the connection, there are others out there. Back in 1992, it was a moderate Southern governor, Bill Clinton, who charted the path to Democratic resurrection.

New saviors are sure to rise before 2020. But it may take some years in the wilderness before the party figures out which ones can find the promised land. 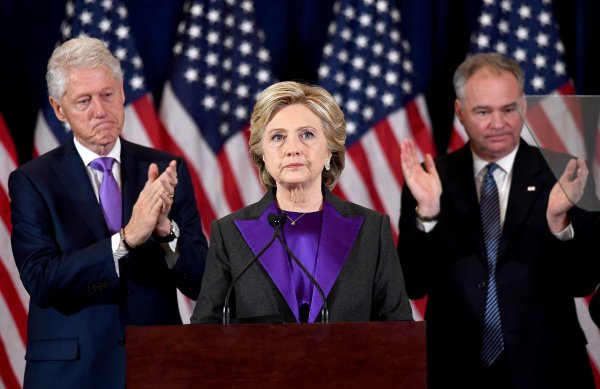 How Hillary Clinton Lost
Next Up: Editor's Pick